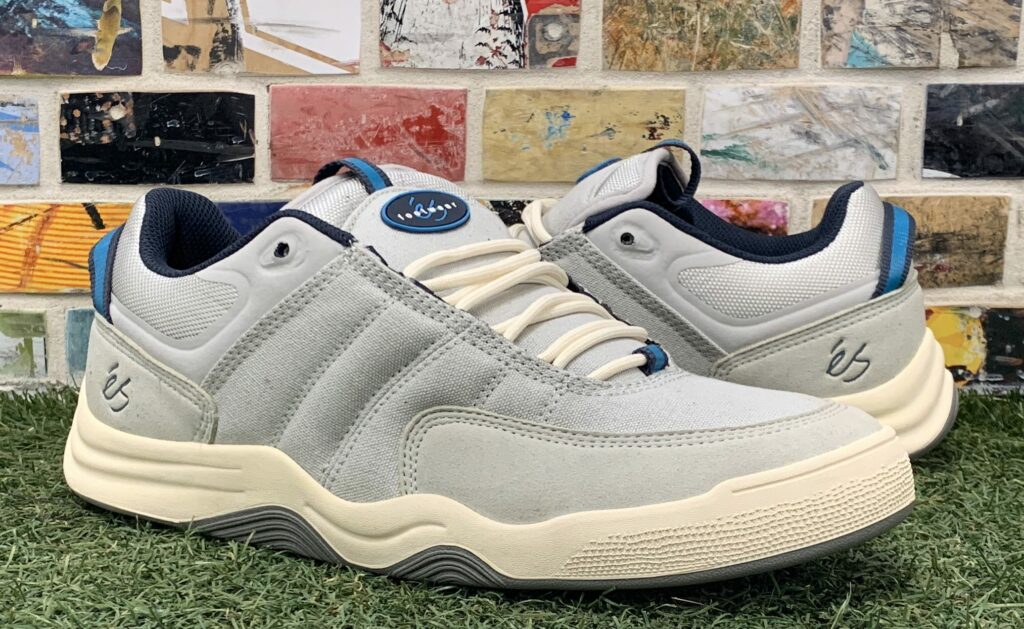 The Evant, (aka Evant Vegan) is a new model from éS that is reminiscent of the 2000’s tech era with some signifiant contemporary upgrades. One of three in “The Vegan Pack” capsule release (including Symbol Vegan and Accel Slim Vegan) the Evant is right in the middle at price point and and heft.  It also strikes a balance between the use of canvas and synthetic-suede.  Since this review has been a long time coming, delayed by skate injuries and the the usual 2020 slow downs, I’ll cut to the chase.  The Evant Vegan is my favorite skate shoe in at least a decade, keep reading to find out why. 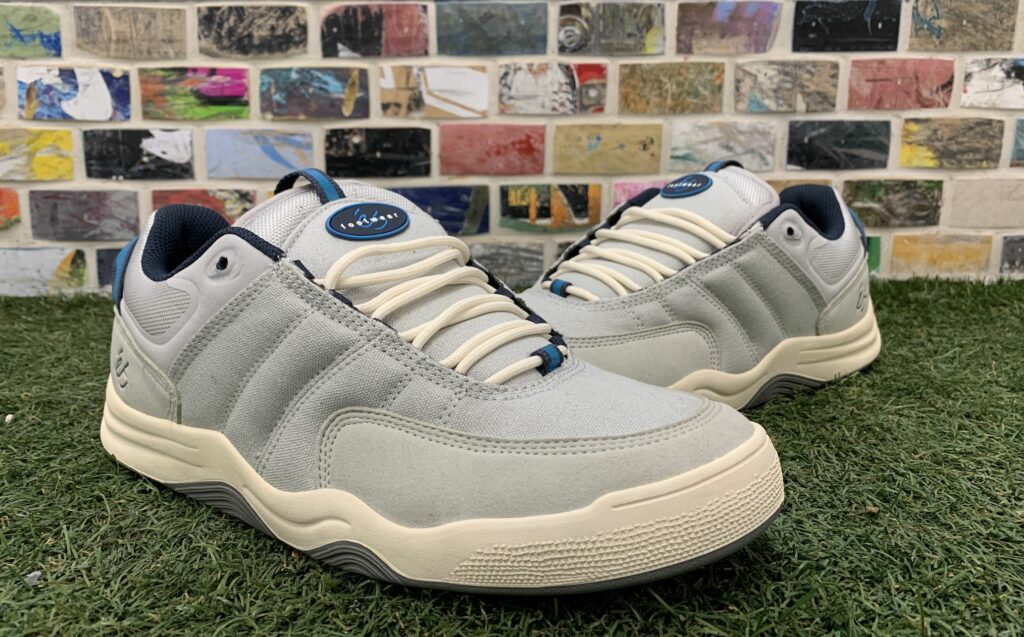 At first glance the Evant Vegan looks almost like the éS Koston 3 (K3) with stitched canvas detailing and positioning of the triple-stitched faux-suede toe-cap.  The EVA midsole, (the white between the rubber and the upper) is curvy and and cushiony, just like in the days of big-rail skating!  The grey blue tones and details are more muted than other (non-vegan) colorways but the shoe still pops. You’ll be getting questions on where these blasts from the past came from. 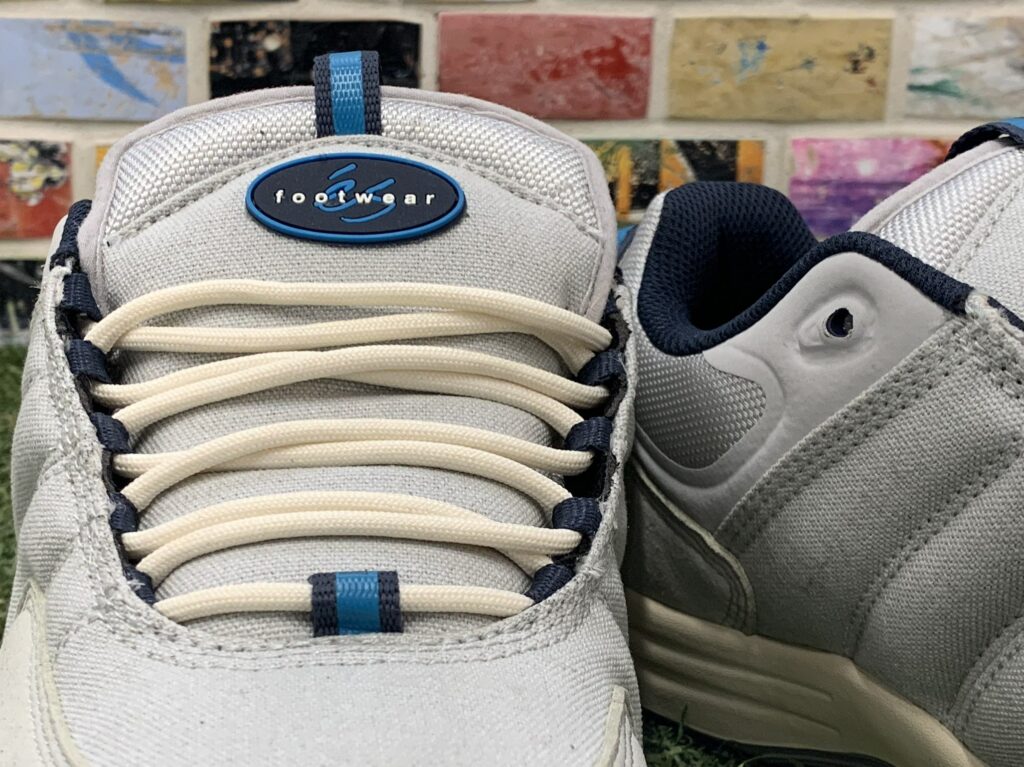 Evant Vegan comes with a classic rope-lace with an inner-lacing system. Great for protecting the laces from pre-mature breakage and they look really good! éS oval logo couldn’t look more at home, forget Portlandia, the dream of the 90’s is alive and well in the Evant Vegan. 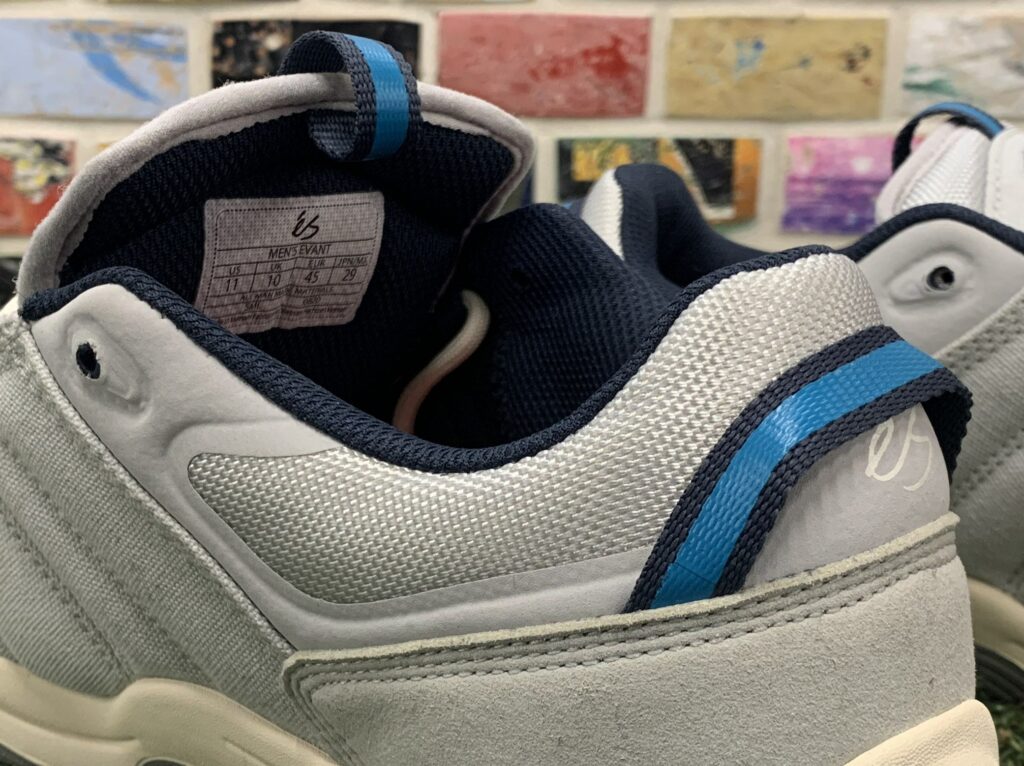 Two key features on this shoe I really appreciate are the tongue and collar.  The tongue by todays standards is chunky and comes up high, (I would say chonk but that’s revered for the Symbol) and that’s a feature a lot of us have been missing in contemporary skate shoes.  If feels soft but protective.

Next is the collar, nicely accented by a reflective cordura-type material.   The Evant Vegan collar is protective and has thick padding. Reinforced by another triple-stitched synthetic suede panel, it keeps my heels locked in and protected from deadly skateboard projectiles.  The heel-loop is icing on the cake if you hate to tie and untie shoes.  Grab it, pull up, and jam your foot right in there. 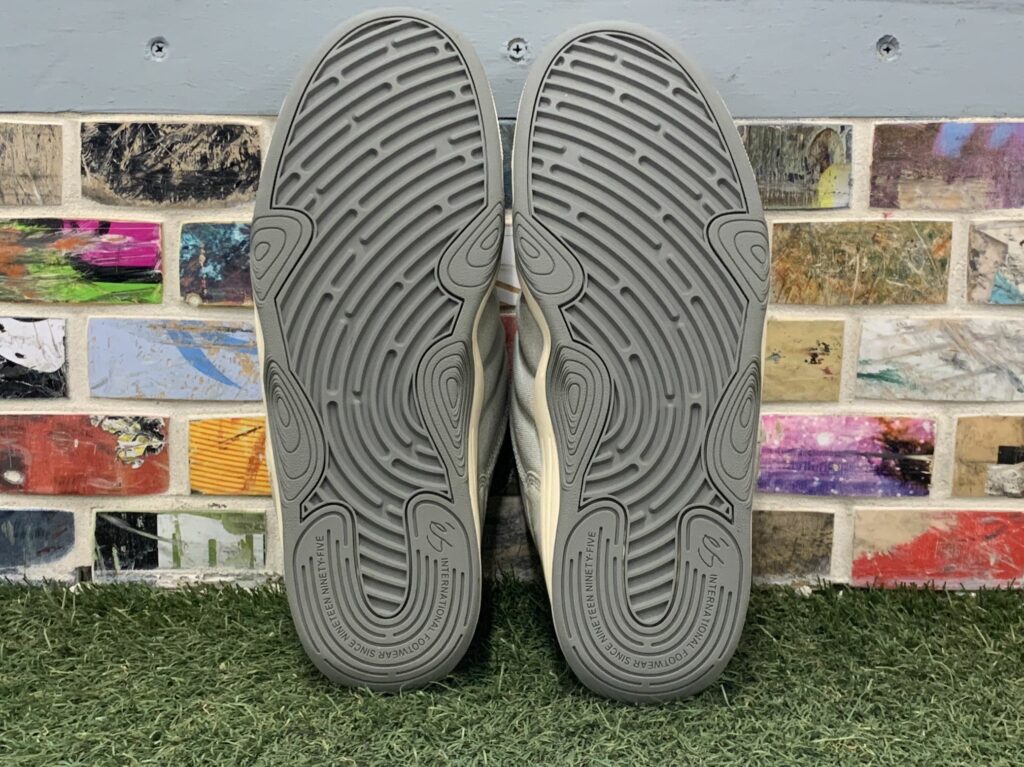 éS has been making shoes for 25 years and the soles let you know it.  Great traction with deep labyrinth grooves, or maybe a map out of West World. 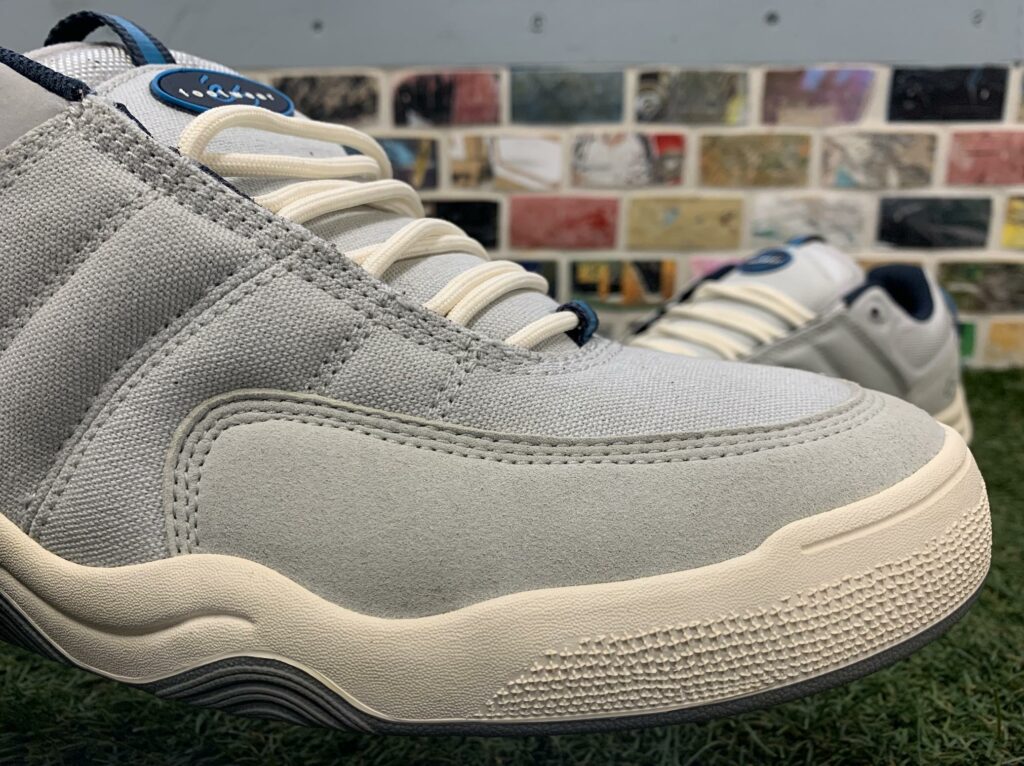 The Evant Vegan is a sensible approach to a solid skate-shoe.  Canvas is breathable and keeps your feet cool. If paired with the right toe-cap material I couldn’t ask for anything more. Thats what you get here!  The synthetic-suede toe-cap goes higher and further back than some other shoes Sole-Tech has released previously.  This means you’re more likely to put the wear into the ultra-durable faux-suede and keep skating longer. 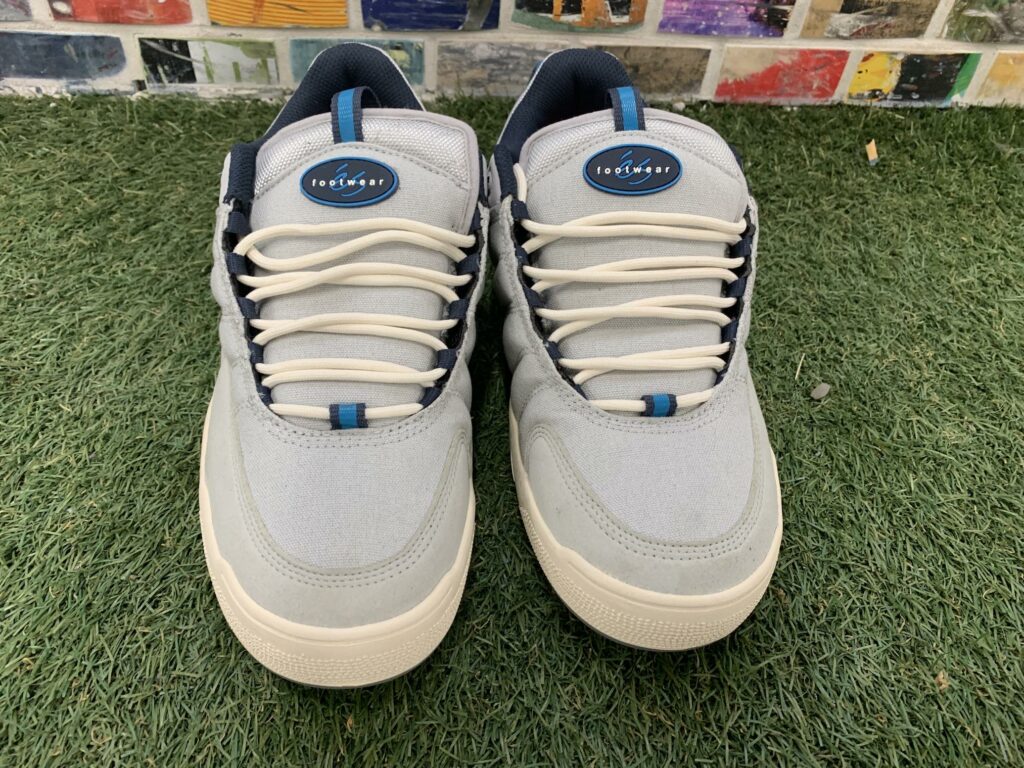 The biggest feature I think I appreciate about the Evant Vegan is the large toe-box. For the first time in a long time, I can really spread my toes and feel comfortable in a skate shoe.  This happened out of the box with virtually no “break in period”! 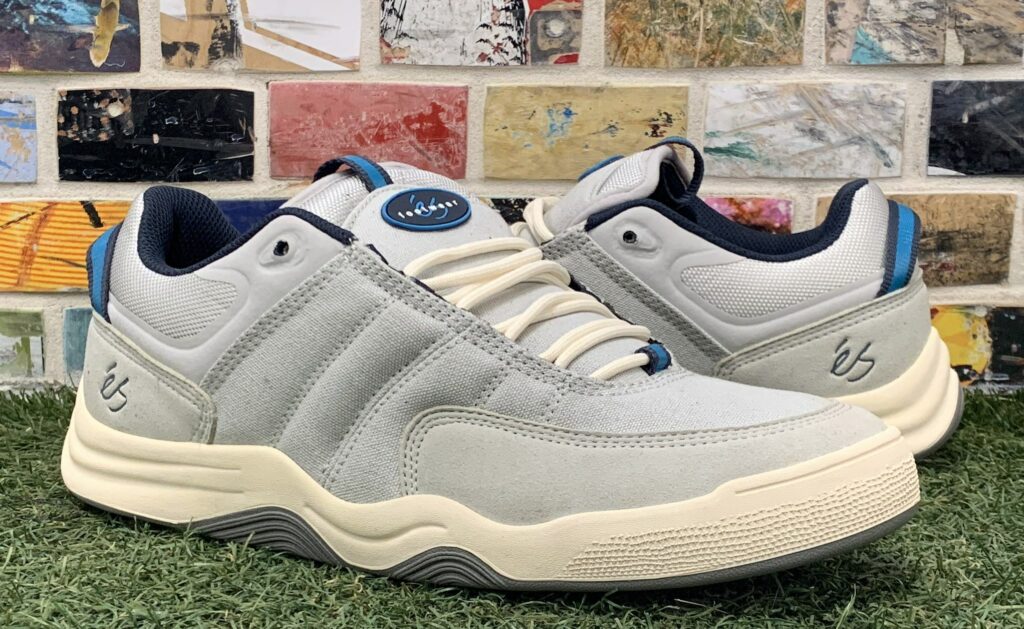 éS really came to the table with something special here.  The Evant Vegan isn’t too bulky, but it is nowhere near the slim skate shoes (especially in the vegan market) that has been so prominent since the late 2000s.  In the last few years I have had significant bone damage in my feet from three decades of skating. To the point where I stopped wearing skate shoes unless I was going skating, the Evant Vegan has turned that around.  Not only are they super comfortable to skate in, I can walk a couple miles and still feel support in my heels.   10/10 éS  keep this one evergreen.

The one way for us, the vegan skaters of the world to have these shoes keep coming is to let és know. With both sales and your voice.  Reach out to them, but also, smash the link.