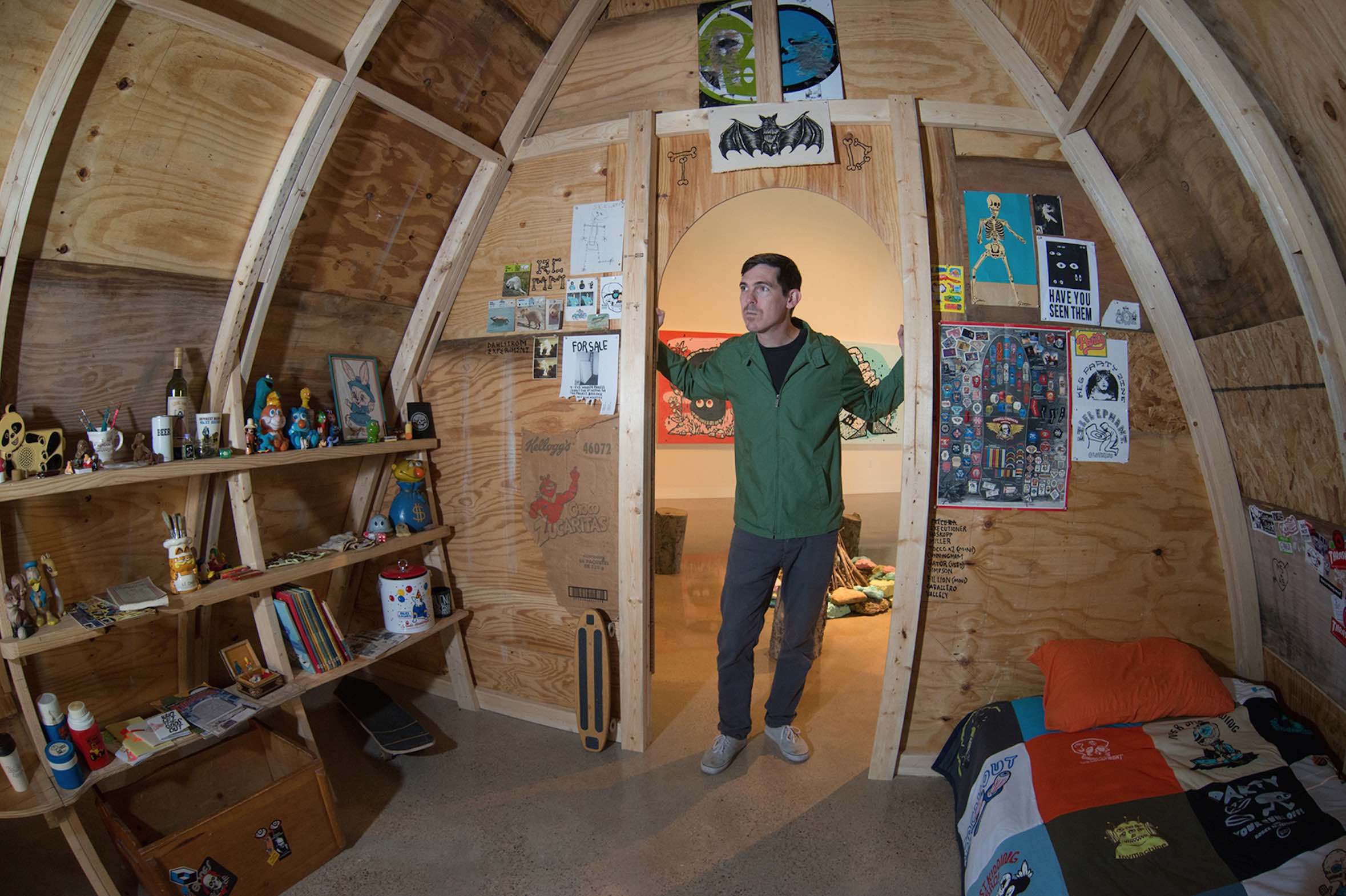 from Sieben’s 2014 show, “It Will Happen Again” at the Visual Arts Center at the University of Texas at Austin photo: Sandy Carson

If you follow skateboarding, flip through the pages of Thrasher and Juxtapoz, or browse the shelves of Target (though on this last one you’d be a little mistaken) you’ve certainly seen Michael Sieben’s unique brand of zombified skateboarding youth, woodland animals, and anthropomorphic abstractions. Sieben’s graphics and illustrations have a lowbrow creature quality that follow a lineage back to the greats like Ed Roth’s infamous Rat Fink, often accompanied by banners or slogans of teenage irreverence and self -deprecation. The appeal and appearance of slack, no big deal, and whatevers’ that pervades Michael’s work veils the rich expression of youth and imagination. Maybe thats why we dig his art so much! He is also a really funny dude!

Kevin Marks asked Michael a bunch of questions a little while after we put him on the spot for a trick in our skate video, PDX to TX to PDX.

Michael is part of Agent Provocateur, a group show of subversive skateboard artists now showing at the Subliminal Projects in Los Angeles. The show runs through February 21st. 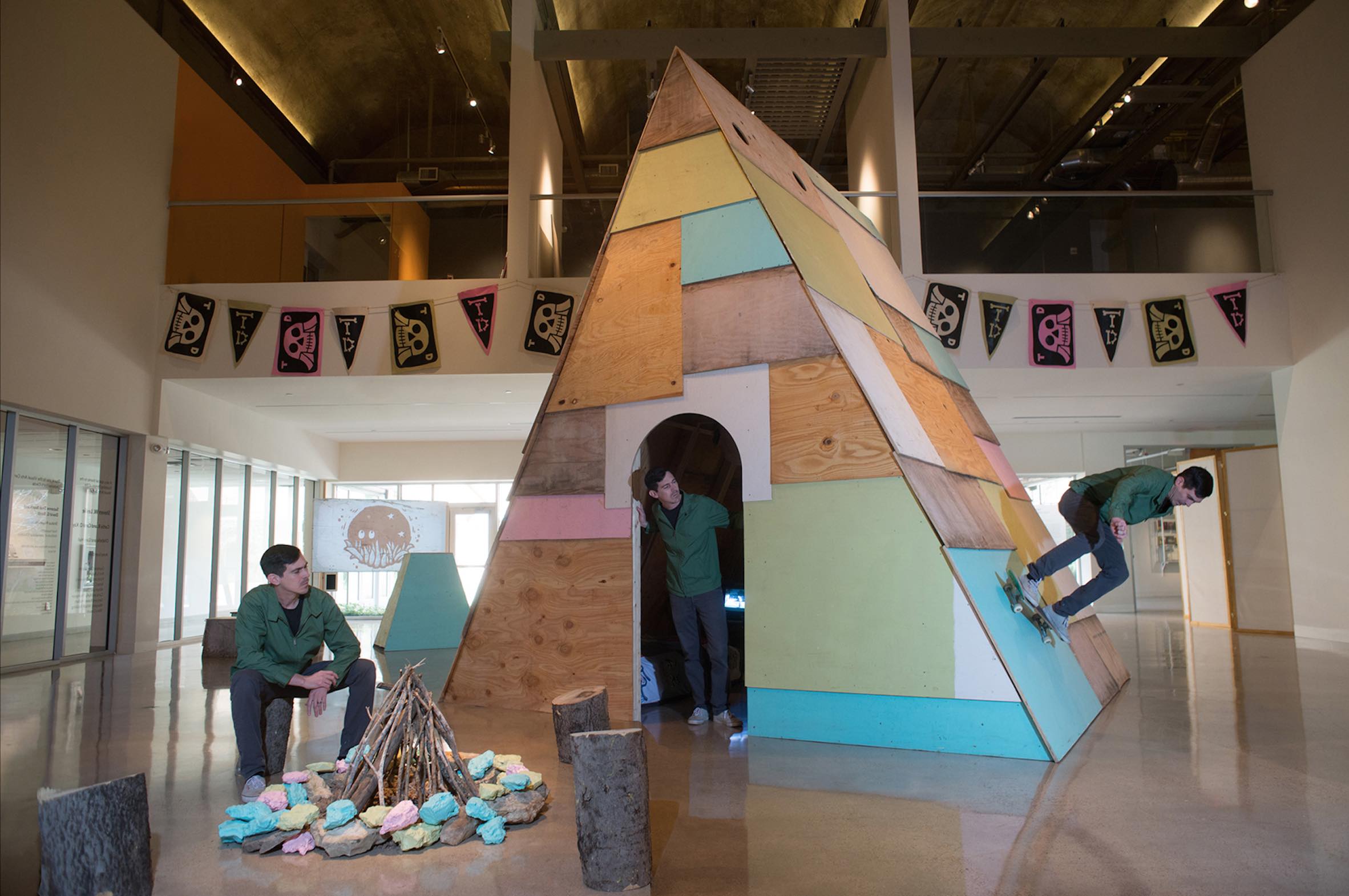 “It Will Happen Again” at the Visual Arts Center at the University of Texas at Austin. 2014 photo: Sandy Carson

What year did you first step on a skateboard?  I got a yellow plastic California Free Former board for my seventh birthday in 1980. I dorked around on it here and there but got more serious about ‘boarding around ’85 or ’86 when I got a Nash Executioner for Christmas (by request). I quickly realized that it was subpar and got a lawn-mowing job so I could buy a Rob Roskopp street model. Jim Phillips rules.

What or who led you to that skateboard?  I was super into BMX as a little kid, but I remember going over to some dude’s house and he had a tiny quarterpipe in his carport and a Nash board. I don’t think I ever rode my bike again after that day. I’m not exaggerating. I quit riding BMX that same day and dug my old plastic board out of my closet. Done deal.

Describe your skill level on a skateboard…  Getting worse by the minute. But honestly, I’ve never been very good but I’ve always loved the challenge.

Who would you point to as your favorite skater from the 80’s? the 90’s? the 00’s?  and currently?   ’80s: Natas and Gonz ’90s: Hensley, Rick Howard, Lotti, Ocean Howell and Mike Daher ’00s: All my friends. I kinda quit idolizing strangers during this period of my life.  That being said, I’ll sit and watch any footage that pops up of Grant Taylor. Magic-carpet ride.

Why do you like ditch skating so much?  Bank skating has always been my favorite terrain, for some reason. Also, there’s tons of ditches in Texas, so not skating them would seem rude to me. But it’s the same ethos as street skating vs. skating in a park, I like that ditches are naturally occurring and there’s nobody there to enforce any arbitrary rules. 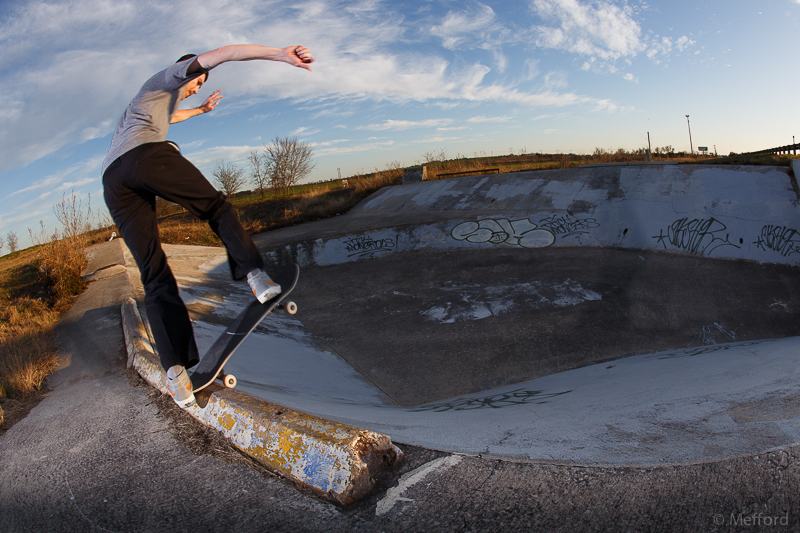 Can you pick your favorite ditch of all time?  C-Tech, for sure. (Although It’s called C-Fan now.) My dad used to drive me there when I was a kid and he’d read books in the car while I skated.

Is the C-Tech ditch still alive and well?  When did you last skate it?  Yeah, it’s still running. I skated it about a week ago.

Can you elaborate on your managing editor position at Thrasher? What sort of things do you work on now for the mag?  I manage the content of the magazine, so I’m responsible for collecting and editing all of the words that are in each issue. I work very closely with Michael Burnett and the guys in the art department. I’ve been reading Thrasher since I was 12 years old, and getting to work for the mag as a full-time gig is an honor.

Does it all seem manageable from Austin? Taking more trips to SF?  I’ve had the job for a year and a half and haven’t been to SF yet. Not that I’d mind to head out there; I love that city. But it’s really easy to communicate with the dudes in the office by sending pdfs back and forth. I’m kinda boring myself right now.

Besides drawing and skating and family – what other things play a big role in your life?  Friends, haircuts, reading, watching movies, Topo Chico, Paul Simon, Willie Nelson, tacos and traveling.

What do you stand for?  Doing what I say I’m going to do. 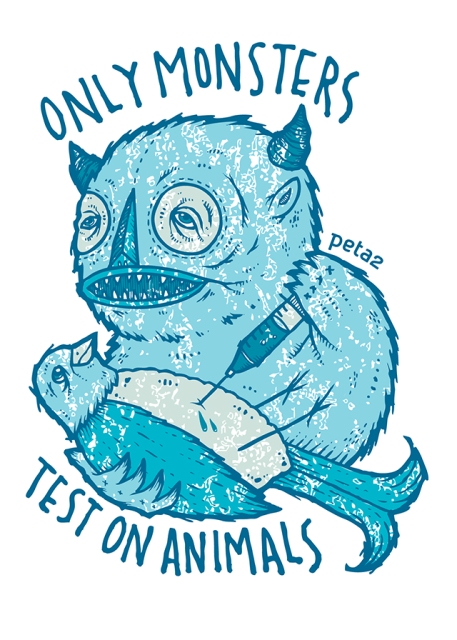 How did your Peta2 design (only monsters test on animals) come about?  I was contacted by Peta2 to create a sticker design for any animal-rights issue I cared about. I was honest and told them that I’m not vegan or even vegetarian, but that I’d be totally interested in working on something dealing with animal testing. I don’t know. Maybe I’m a hypocrite. Probably.

Did you have a pet growing up? Do you have a pet now?  Yeah, I had a dog when I was little and a cat when I was slightly-less little. My wife and I had two cats until they got too old to be cats. We recently rescued a beagle and named him Willie. He killed a squirrel in our backyard the other day. He’s kinda a wild ass.

Have you had your ass beaten for being a skateboarder?  Nope. But I’ve always been a smallish man, so maybe there’s just never been any sport in it. I think when I was in high school and everybody had quit skating, I was just more of an anomaly than any type of threat.

Do you ever get comments on the graphics you drew for the TAMPA AM OLD MAN BOWL JAM?  My dad said he liked them. 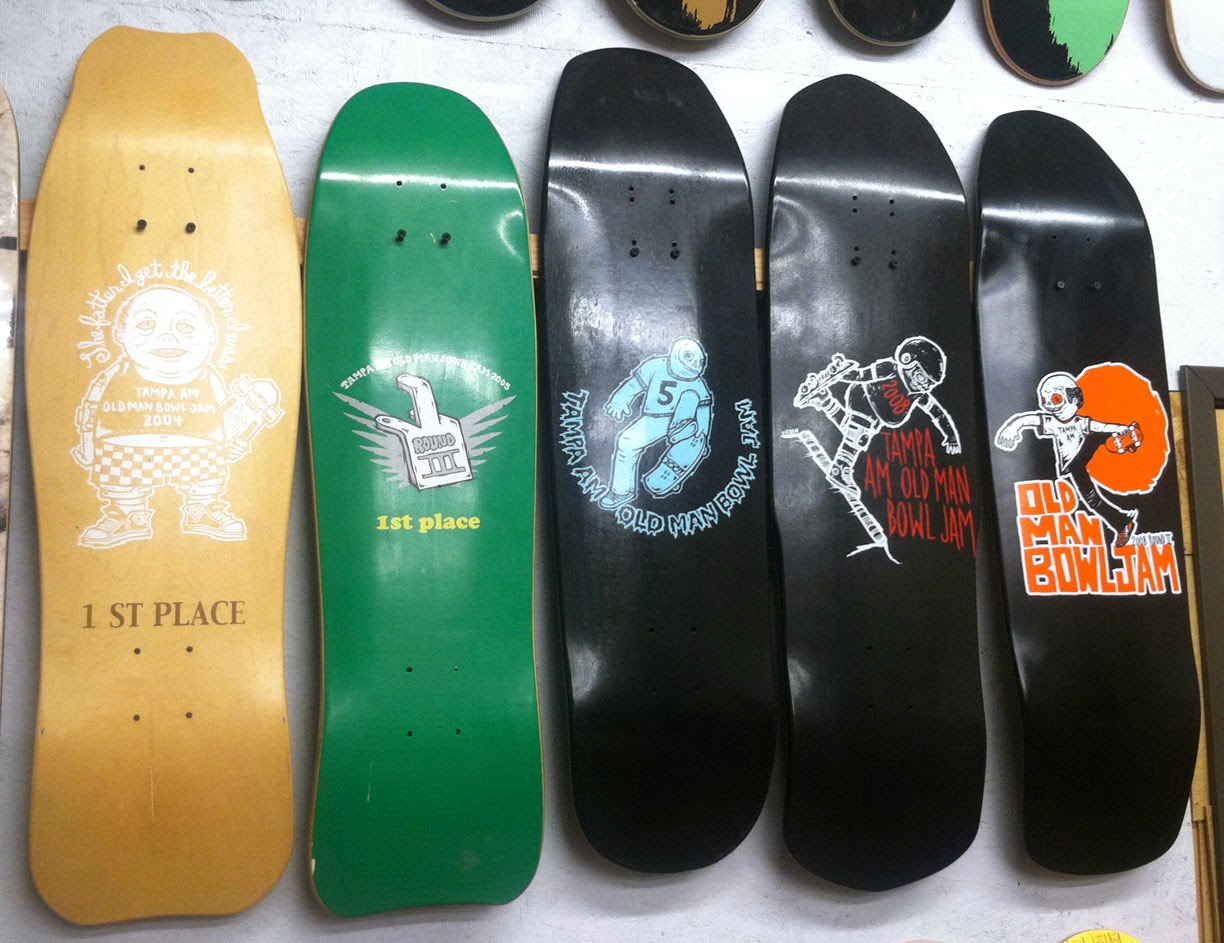 Do you have any memories from your trip to Tampa Am?  Yeah, I remember watching Grant Taylor skating (this was probably 2004?) and I thought to myself, “That little kid has got it. Whatever “it” is.”

What’s the most memorable place skateboarding has taken you?  Honestly, probably to Austin, TX, where I met so many lifelong friends. The community I became a part of here in 1996 has shaped me to be the dude I am today. I’m grateful.

How did you pitch it to Volcom or did they come to you with the idea?They asked me if I’d be interested in doing an internet show with them. The idea terrified me, so I said yes, I make a conscious effort to do things that scare me. I think it helps you grow. Anyway, right around this time my buddy Mike Aho, who works for Volcom, moved back to Austin and we collaborated on the show. The two of us wrote all of the episodes and Mike filmed and edited everything. He did the heavy lifting. All I had to do was some bad acting. And take the brunt of the hateful Internet comments.

Anything else you’d like to discuss? Yeah, I’d like to talk about how I believe that horizontally-striped shirts are going to be the next big thing in skate fashion. It’s on record.

Thanks Kevin for this great interview, you can follow his adventures at Traveling Free Box. Photo credit at C-Tech Ditch goes to goes to Shaun Mefford. Check out his tumblr page for some great skate and music photos.   Sandy Carson, shot the skate shack photos from “It Will Happen Again” at the Visual Arts Center at the University of Texas at Austin.  His photography site features some amazing images including a photo project called “Just Do It“, exploring a Trap-Neuter-Release program in Central Texas.

For more of Michael’s work check out his site, and keep reading Thrasher.