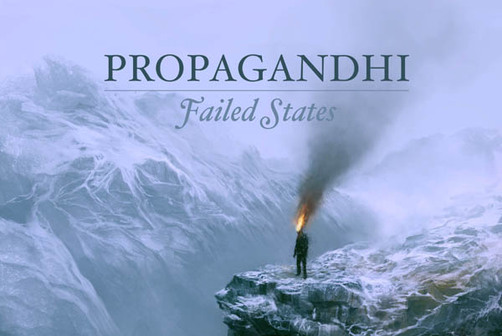 The Sixth Propagandhi album, “Failed States“ has already hit the internet and officially is released this Tuesday. As a band often labeled skate-punk they started their studio career with the SoCal label Fat Wreck Chords and cemented a foundation of smart and punching political insight, setting themselves apart from the  sea of bands whining about subjects of white privilege and middle class malfeasance.  Since the first record the lyrical content has evolved and the sound has ever become more ripping and complex.  The seminal thrash-punk band that founding members Jord Samolesky and Chris Hannah first set out to create has transcended the pop-punk genre they first landed and risen above the sludge of mediocre hardcore. It was with great pleasure that I had the chance to speak with Chris Hannah about the band, the politics, and a sprinkle of hockey.  Stay tuned for part 2. (This was a LONG interview.)

Chris Hannah: I’ve always been surrounded by it the entire time the bands existed. I do ice skate.

Mr.F: Okay this interview is over (laughs)

CH: I’ve tried to skate in the past but its always been underwhelming, embarrassing. (laughs)

Mr.F: Do you know the spark that got you into social justice issues and animal rights?

CH: Well it was probably specifically the band Millions of Dead Cops, MDC.  When we were growing up in rural Manitoba in these tiny towns and had no connection to a music scene. We bought our records at a sewing shop, of all places, and for some reason they carried speed metal records there. Me and Jord were really into the early thrash metal scene and then Jord started branching out a bit and he bought this record by MDC. At the time I was like this raging right wing freak, like 13 or 14 years old. I thought the politics on the record were insane but then as soon as I left his house I went and got a copy of it myself because I was intrigued by it.  They were the first band I ever listened to that said anything about vegetarianism. I had never heard of it before really and it really appealed to me. There was something that resonated with me and feelings that I had from a young age. You know I had been sent out on hunting trips as a little kid. Something always felt like I wasn’t one of the guys and I never knew why.  As soon as I heard there were vegetarians, people that were outwardly against animal abuse, I was like, “Well, fuck.  That’s what I am.  I’m against that too.”  So the next was, “Are there more bands like this, are there more people like this?  Then it was a landslide of bands out there that helped me define my own values through what they where saying.

Mr.F: In the early nineties, around the time “How to Clean Everything” was released there was a huge ethical Vegan, environmentalist, hard-line movement going on in the Hardcore scene. Earth Crisis is still touring and talking about Animal Rights and Environmental issues and so is Propagandhi.  How did you feel about that scene in 1993? Propagandhi had such a different sound back then and seemingly no alignment with that scene.  There were clear connections in what each band was talking about but the crowds are clearly different.

CH: We’ve always been fairly isolated as a band and the scenes that evolved in the states. At the time I was aware of the scene and I wasn’t so sure of it, I was very interested in what they were talking about the animal rights movement and the earth liberation movement, but there was a vibe that didn’t make total sense to me and turned me off a bit. On tour we did encounter some people from that scene and a lot of the people involved where actually quite conservative. And I mean that not as a pejorative. Outside their animal rights stance we did not see eye to eye on a lot of things. It was more about this level of purity if anything else.  That’s never how I’ve regarded Veganism. Its not about purity, it’s about withdrawing your support from a vile industry.  In retrospect I wish I had more engaged with that scene because it was crazy. It was this wide spread animal rights movement that was actually inspiring people to take direct action against the industry.  As far as I understand, it doesn’t really exist anymore like it did back in the 90s. In some ways I feel like it’s a missed opportunity that I didn’t engage with it more.  Not as, become a band like that or buy more of their records, but as a chance to make more connections.  I don’t know.  It just seems very crazy that that happened at all, you know?

Mr.F:  So what about bands like Rage Against the Machine, they were talking about issues like Chiapas, the Christianity right, and neo-liberalism. Again they where coming out with records at the same time (as Propagandhi) and had a bit more of a holistic of a look at the landscape.

CH: Again, at the time, I don’t know what was going through our minds, but it didn’t occur to me to pay attention. I think I was so interested in a parallel underground scene that was happening with bands like Born Against and Drop Dead, the vibe was very different.  The vibe was very different than the straight edge vegan movement or what Rage Against The Machine was doing. I can appreciate that stuff way more now in retrospect. I think that Rage Against the Machine is a fucking great band with a great catalog of music. On one hand it goes to show, you can put radical politics into the mainstream and it doesn’t change anything, we’re still just all in bands.  On the other hand, there is a place for a band like that who can navigate that world.   A band like Propagandhi would be a colossal flop, if we went that route and tried to engage with the mainstream on the level that rage against the machine did. They did an amazing job I thought.

Mr. F: Do you think music is an effective platform for politics?

CH: I think it can be very powerful. Politics in music played a role in what I felt was a transformation in my life. And, anecdotally, we get feedback from people that make the same claim about music we’ve made. So in that sense it’s valuable. In another sense sometimes I worry that we, people who are involved in music and our progressive politics, feel being in a band is enough. Or singing about an issue is enough. It shouldn’t have to be said but it’s clearly is insufficient for all of us to be in bands and to think that end game of being involved in politics.

Mr.F:  The 90’s idealism is gone where we get involved from that stuff and now everyone just wants to be in bands.

CH:  Yeah, and on the other hand we see our role as a band as being a conduit between the people who are doing 24/7/365 days a year activism, smart, effective organizing and our audience who are generally a little less engaged with activism against the prevailing order. It’s mostly people who just watch television and listen to music sort of passively. I hope I’m not sounding insulting to people who are our audience because that’s not true across the board. But when there are a lot of people who are interested in a band, in general, if you take a snap shot of any small group in society, most people just sit in front of their TVs and we have to stop that. Connecting those two worlds: the people who sit in their houses watching TV, connecting them somehow, even tenuously, with the people who are doing street activism, there’s some value connecting people from those two worlds.

Mr.F: In the past you had groups like Rain Forest Action come on tour and speak between sets about the Tar Sands.  Is anyone coming along this tour?

CH: I don’t think specifically anyone is going to travel with us, but in each city groups are coming out on a variety of fronts to engage the crowds that will show up.  Again, that’s important for us, because that’s what happened to us to get us out of a crazy way of seeing the world to a realistic way of seeing the world.  It started through bands hoisting a different world on us. So that’s what I hope happens to somebody at the shows.

2 Responses to Interview with Chris Hannah of Propagandhi pt.1