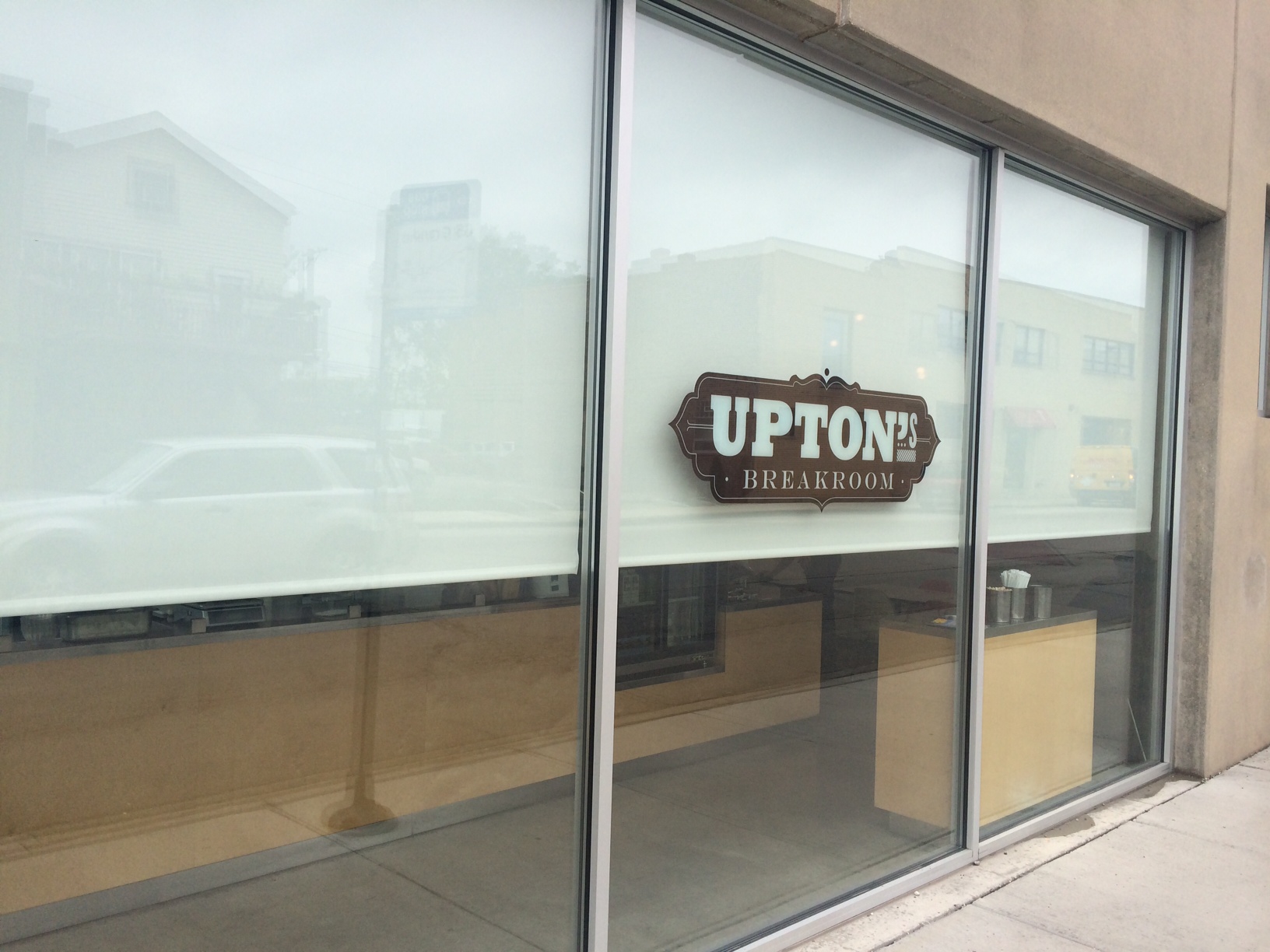 Last year I interviewed Dan Stackmman and Nicole Sopko at Upton’s Breakroom in Chicago. They recently celebrated their first year at 2054 West Grand, a building that is home to their 100% Vegan restaurant and so much more.   -Mr. Fakie

MF: Tell me about the building and why Upton’s who primarily manufactures seitan is getting into the restaurant business.

Dan: This is feeling very formal now that the tape recorder is on.

MF: (less serious interview voice) Why did you open up a restaurant?

Nicole: We built this whole building as an opportunity to have some aspect of our business be open to our customers. Before everything was behind the scenes. Now this is our front door. This is our living room.

MF: How about the menu, The Employee Meal, whats that?

Nicole: That was our idea of have something that rotated regularly to keep it interesting for the employees who are eating here everyday.  We wanted to make something thats reasonably affordable, but still filling and has fresh ingredients that people can eat everyday.

MF: Everything you have here is affordable too, There is nothing over 8 dollars.

Nicole: Nope, we wanted to keep our menu reasonable, so you know people in the neighborhood would be willing to check us out. So you know you could eat here with out breaking the bank. 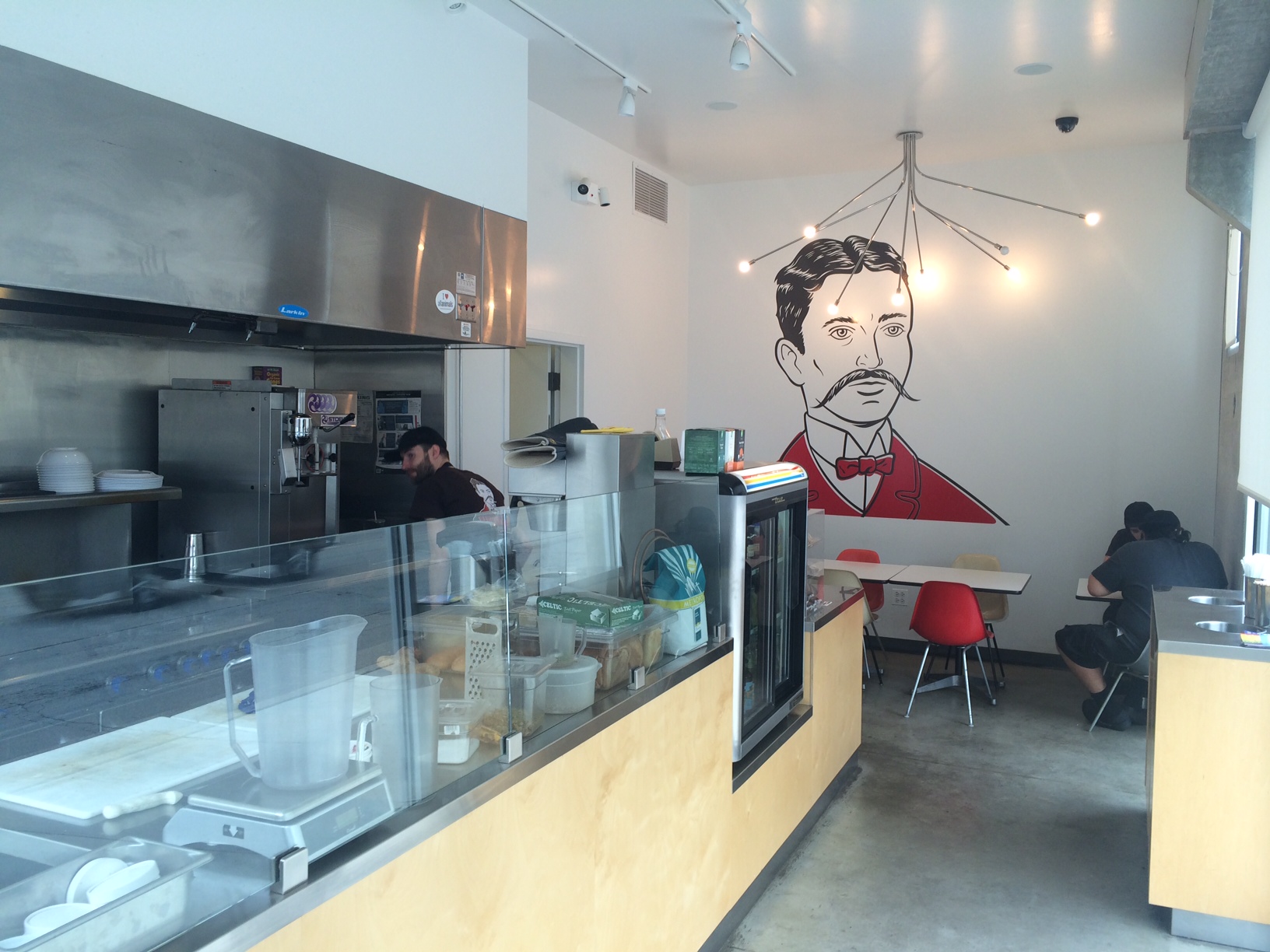 Nicole: Why are’t you talking during your interview? (to Dan)

Dan: Are you going to get some soft serve on your mac and cheese

MF: Possibly. When I was a kid I put A1 Steak Sauce on vanilla ice cream.  Sounds weird right?

Dan: That sounds kind of good.

MF: Raisins are a big flavor in A1 sauce, and it’s Vegan!

MF: Yeah, but Kraft makes it, so there is also an Amy’s version and then that company that makes the vegan worcestershire sauce with the wizard on it.

MF: This is an amazing breakfast sandwich! It’s available all day and you use the seitan bacon!

Nicole: Yeah its a good sandwich, I like it.

MF: A portion of the sales of the seitan bacon are going to Farm Sanctuary. Tell me about how you decided to work with them?

Nicole: When we were launching the seitan bacon we wanted to try something different. I felt like that was something we could partner with Farm Sanctuary on, like that it might be a really difficult process, but they were like, “Yeah sure lets get it started.”  It’s been so easy.  So yeah we donate 5% of every package sold to Farm Sanctuary.

MF: And there is that adorable pig, Julia.

Nicole: Oh on the package, I don’t think that pig has a name but we’ve been making ads with Farm Sanctuary and a pig named Julia.  Upton’s pig on the back doesn’t have a name. Maybe we should have a contest?

MF: You should have a contest!

MF: I don’t know if you read the blog (VSB) everyday, but there is a company in Portland called Bacon Skateboards, and they have a vegan rider Chris Klich.  So his deck has “Vegan” spelled out in Bacon.

MF: You guys should do a combo pack, Vegan Skateboard board with Vegan Bacon!  You guys are down with the skateboard community right?

Nicole: I don’t skateboard. I tried in high school and I’m not very coordinated.

MF: But you do yoga!   Your’e a yoga instructor. I also hear you’re going to have yoga at Uptons.

Nicole: We have a space upstairs that we are calling Maha Dharma Center.   We’ll be teaching yoga by donation. I hope that will be open in the next month or so.

MF: Are you going to do required employee work-outs, like calisthenics. You know to enhance their mellow?

MF: Do you think it will make a better work environments?

MF: So how long have you guys been Vegan?

MF: Dan What made you go vegan 21 years ago?

MF: How did you find out about the basic 3?

Dan:  I guess partially through music and just stumbling upon things.

Nicole: It was just Shelter

MF: Nicole tell me about going vegan. In 1996 it was hard, back then you had Tofuttie ice cream if you were lucky.

Nicole: I lived in suburban Detroit too.  I was listening to Hardcore music and going to shows. I had become straight edge the year before and so it was for the same reasons. It was about your ability to (not have) control of the bigger systems around you. But you can control what you spend your money on and who you support, and every dollar is a vote and thats what your power is as a consumer and a human being.  I didn’t want to support animal agriculture.

MF: Is there a specific show you remember? I remember seeing Earth Crisis, One King Down, and Vision of Disorder. I was already into straight edge and I went to that show and that was sort of it.

Nicole:  You know what, I went to some shows and I picked up a zine or something and I didn’t know anyone else who was vegan and I didn’t know what I could or couldn’t eat. I tried a lot of things that just didn’t work, but eventually I figured it out.

MF: Obviously this is a 100% Vegan Restaurant, so brand new, awesome griddle for making breakfast sandwiches and everything else.  What are your favorite things on the menu?

I know it’s hard to choose, it’s like choosing your favorite child right?

Dan: I think the Italian is good. Then there is the secret menu item, “The Dirty Tony”  named after one of our team members that took the Italian and added gravy to it. Its double dipped in the broth and then theres a bunch of gravy poured all over it.

MF: It’s not because he is dirty, you don’t have any dirty workers in your facility, they are all clean.

Dan: You have to ask for it by name, it’s not on the menu.

Nicole: I eat the employee meal a lot because it changes. Lately its been a lot of organic kale and brown rice and I really like that.  Everything is so good I couldn’t chose.

MF: And you can always have soft serve afterwards right?

Nicole: Yep. Yesterday I had our triple chocolate cookie monsoon.

MF: Holy Crap. Oh and you also have baked goods, and I hear you have a super star baker!

Nicole: Kelly Poloza, The Vegan Cookie Connoisseur! Author, photographer, there is nothing she doesn’t do. She’s developed all these recipes specifically for Upton’s Breakroom.

Nicole: Did you see the back of the building? Skateboarding and Street Art, those go together right?

MF: Oh there is street art? 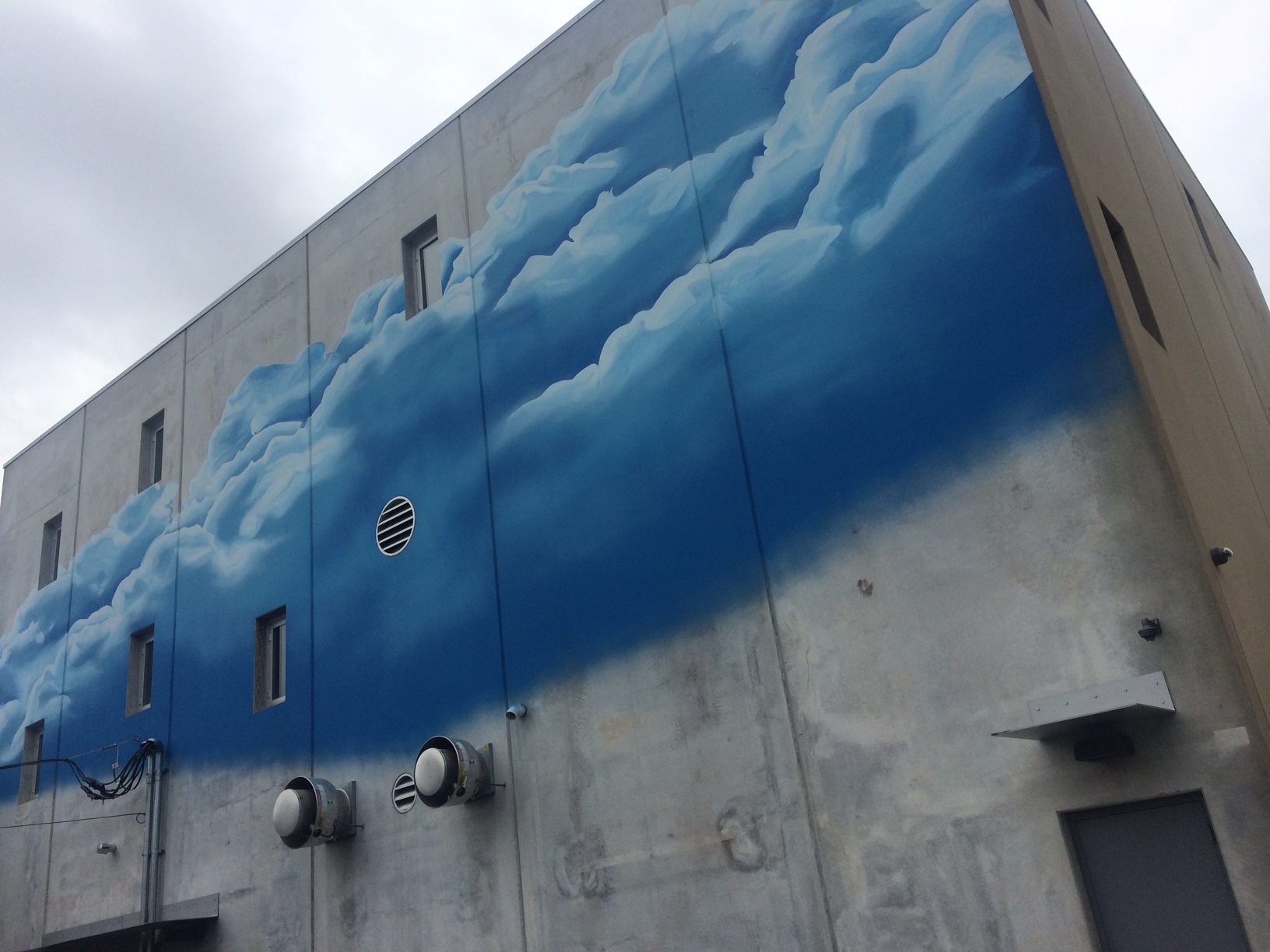 Nicole: We had Gabriel Spector do the back of the building.  Dan And I learned about his work a few years ago when we saw his work at a gallery show here in Chicago.  When we thought about what we wanted for the back of the building, Gabriel was the first person who came to mind. We contacted him, he’s based in Brooklyn but travels to do work all the time. We contacted him and he was totally on board with the project. He’s a big fan of seitan, so it worked out really well.  He worked back there for about a week.

MF: Did you pay him in seitan?

MF: Thats not a recognized currency yet.

Nicole: There are some jobs you can pay in seitan, but working for a week, 16 hours a day isn’t one of them.

MF: You got to get some spinach for that too.