the south, and heading east… 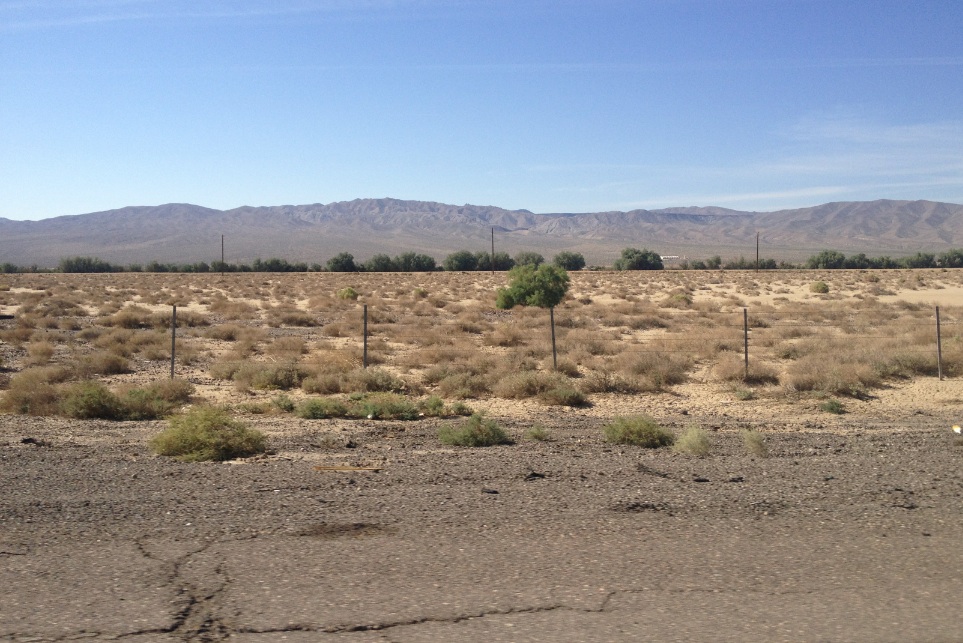 the south, and heading east… approximately 96 hours from Los Angeles to Pittsburgh driving solo. This was the last leg to finish up a month long skate trip and mental head cleaning.  Big Sky country and the Northwest in general have some great parks. Down south though, skateboarding is mainly a non-summer endeavor,(at least in the day light hours) leaving 9 months to shred. 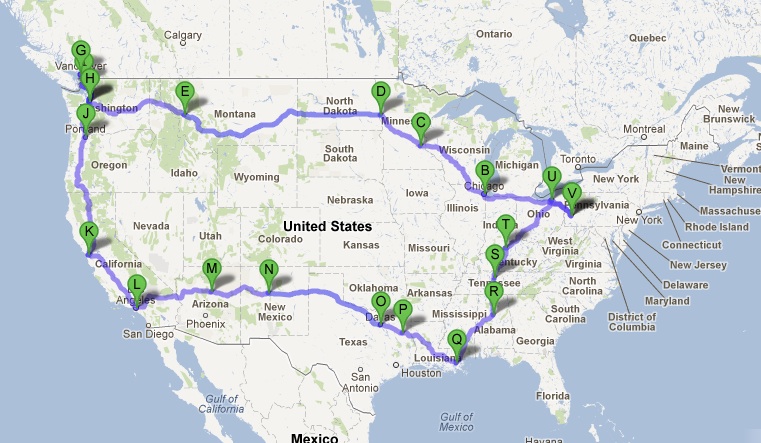 Most every town has some sort of slab, park, or D.I.Y. spot if not a gnarly street scene.  Due to time scheduling, some of the skate stops where limited to just a parking lot or a gas station, however this trip numbered 47 states my board and I have visited. Some particularly amazing food was consumed and makes the route one I would love to trace again soon. The one thing that remains true; People come and go in this life but skateboards are forever. 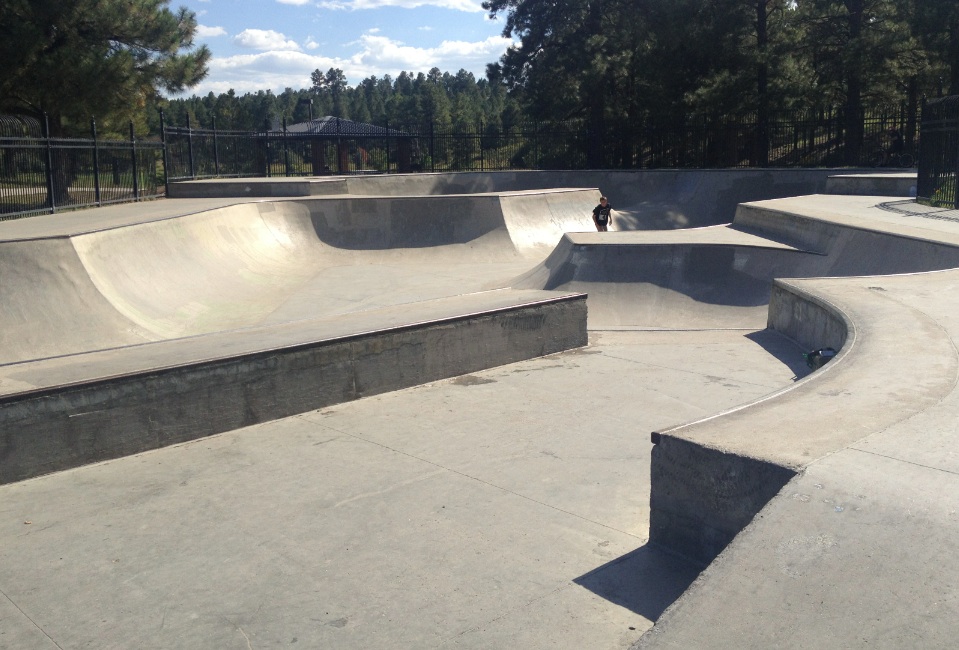 First stop after leaving LA was Flagstaff. The Foxglenn Skatepark is a small detour off the highway. Super easy to cruise, some of the bars, rails and boxes are not thought out well. The park was over run with scooter nerds. Over all though easy lines with a good mix of banks and transitions. 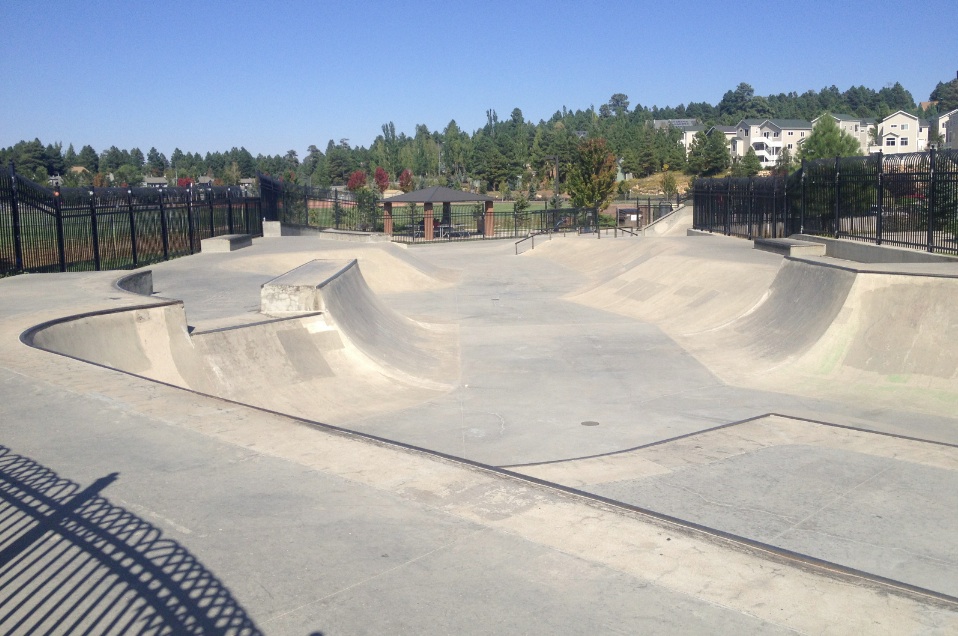 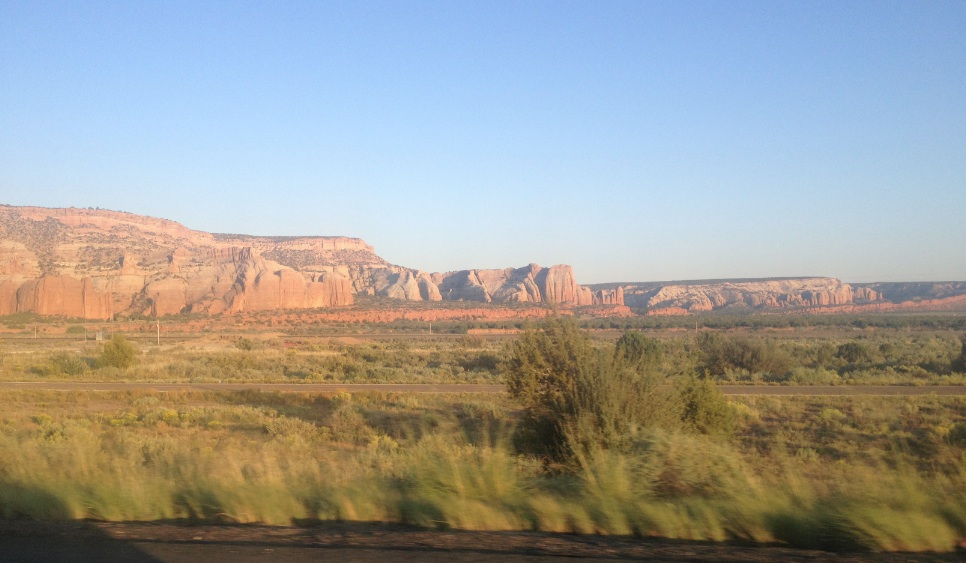 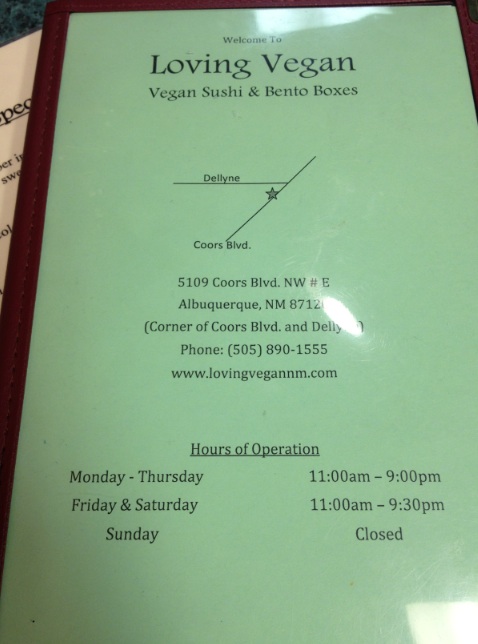 Loving Vegan was my first stop in ABQ! Usually eating pre-skate is a no go, but I read some great reviews of this all vegan sushi restaurant and they did not disappoint. 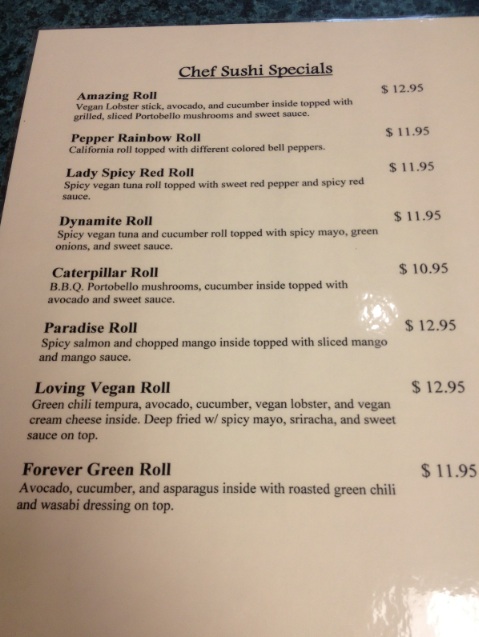 These are the special roles! Every sea animal you can imagine Veganized!!! 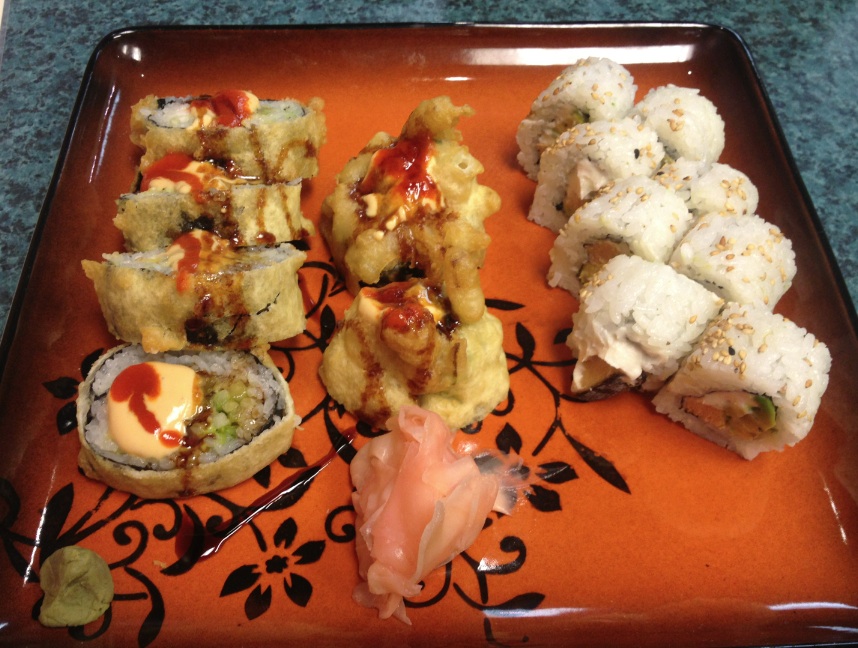 I had the house special, “Loving Vegan Roll” (left) and the Philadelphia roll (right) 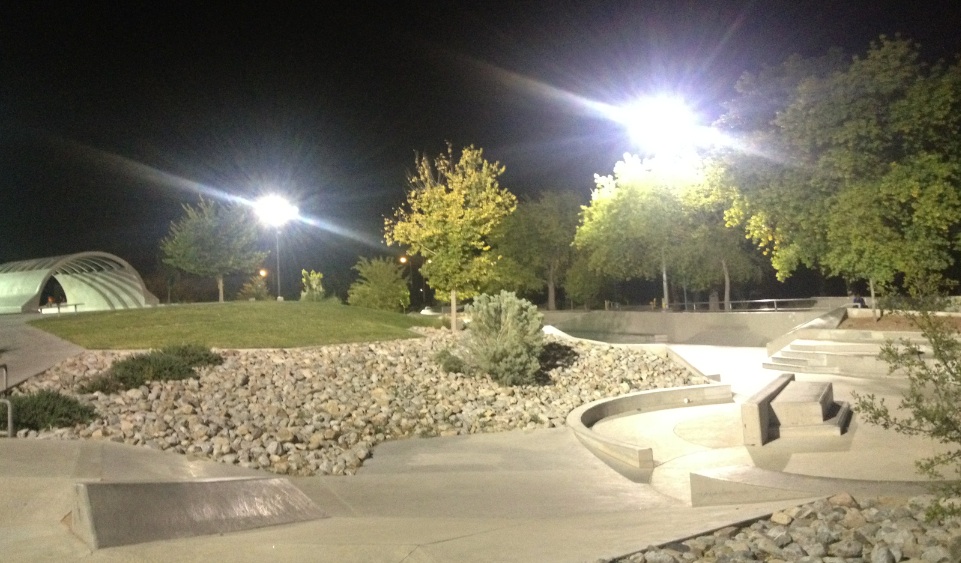 Albuquerque Skatepark was a straight shot up Coors Blvd.  The park is the biggest in the southwest according to the Albuquerque Parks department. 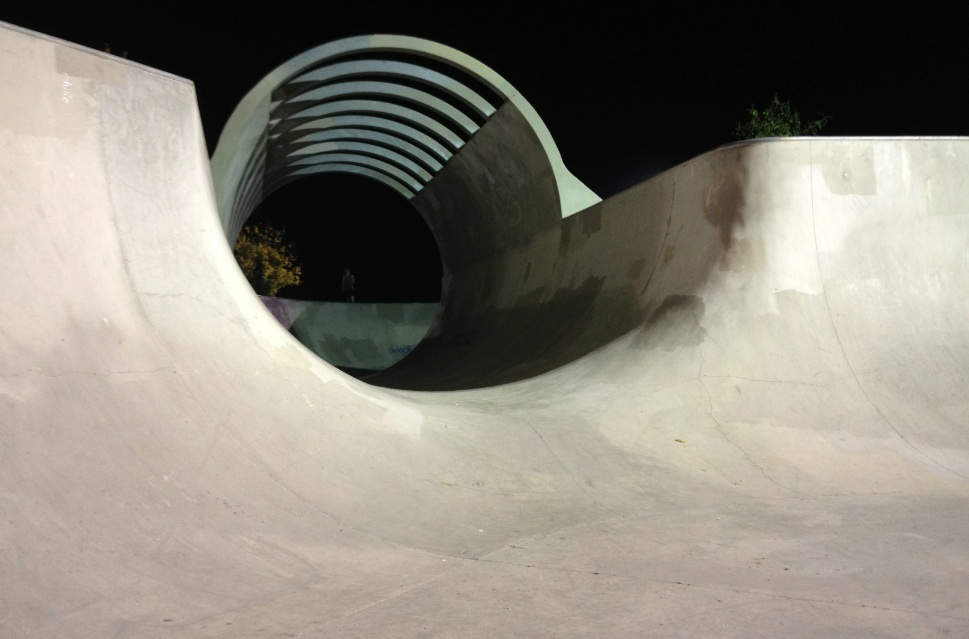 It certainly is expansive and features an 11 ft bowl with full pipe.  Though not well kept as I hit some asphalt loose cement fragments twice and took some gnarly hits. 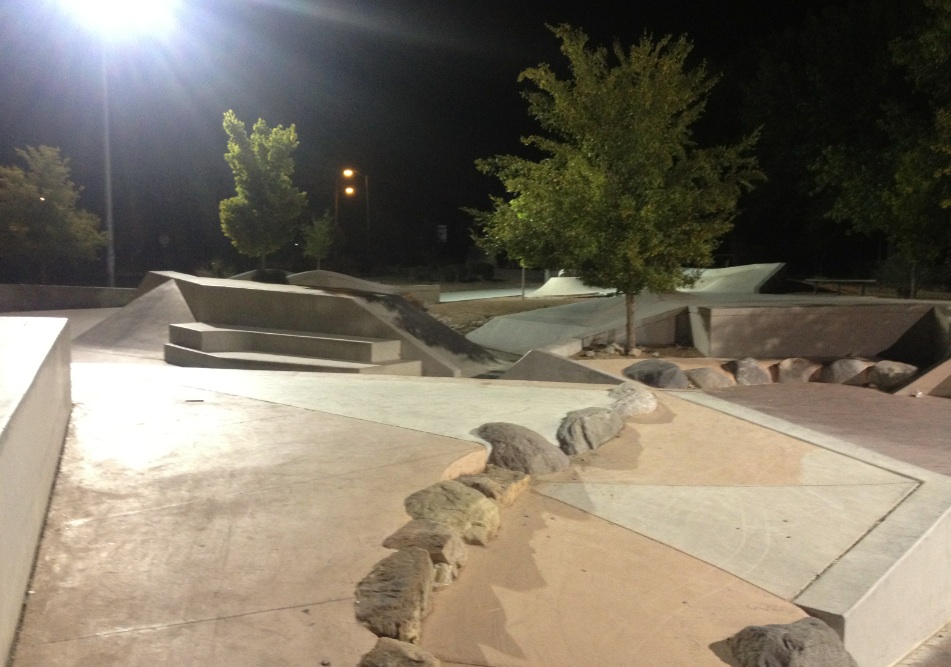 The rest of the park is a schizophrenic plaza. Hubbas and stairs that have nearly no roll away. Banks that lead to ditches and adjacent banks to close or short to do much with. 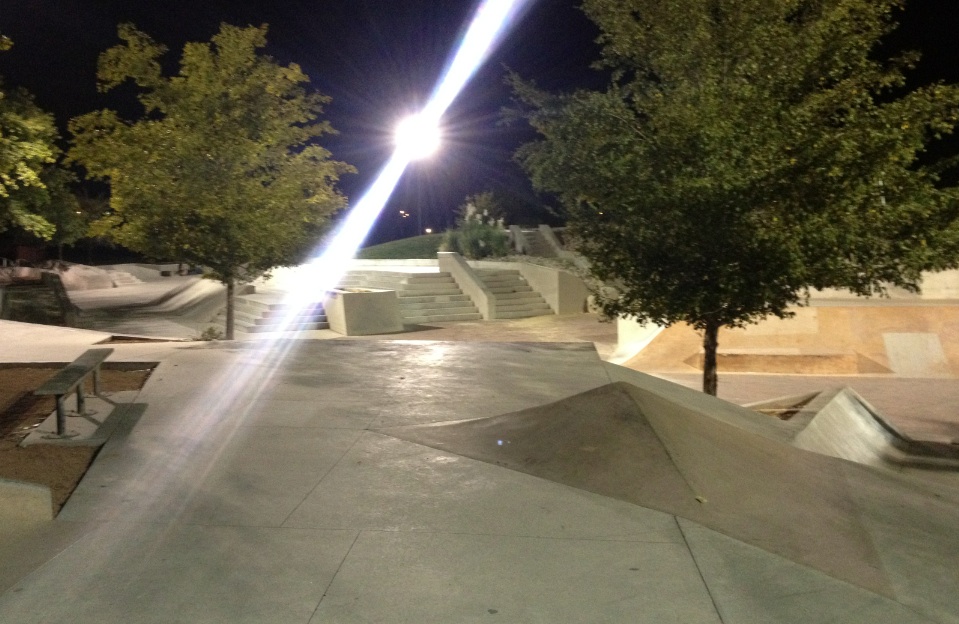 Beware, the park closes at 10pm with no warning. The lights turn off at 10:04pm If you think the lights are bright in my pictures thats because they are. When they flick off it is as starkly black and dangerous. I was heading to a medium sized bank full speed when the lights went out. SCARY! 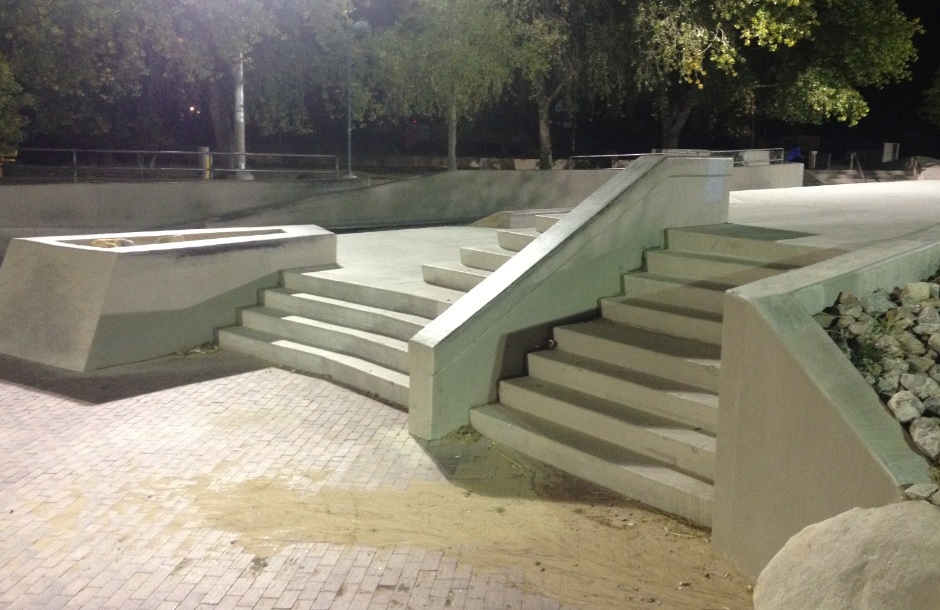 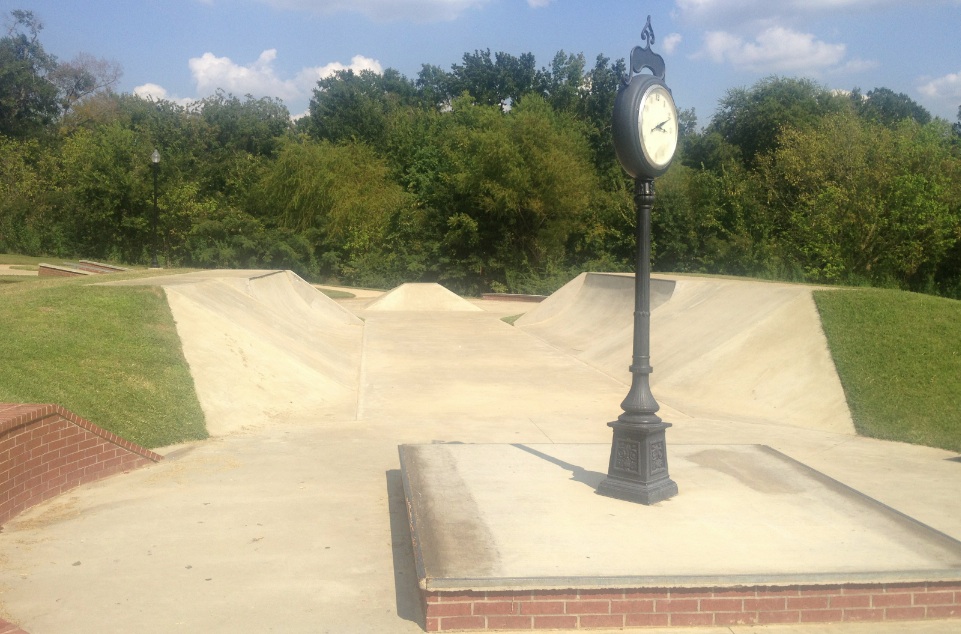 If you find yourself in Henderson Texas, I’m sorry. Next time I’m anywhere close to Dallas I’ll bring a jackhammer to kill this abortion of a park. This spot is the Disneyfied version of ditch skating. 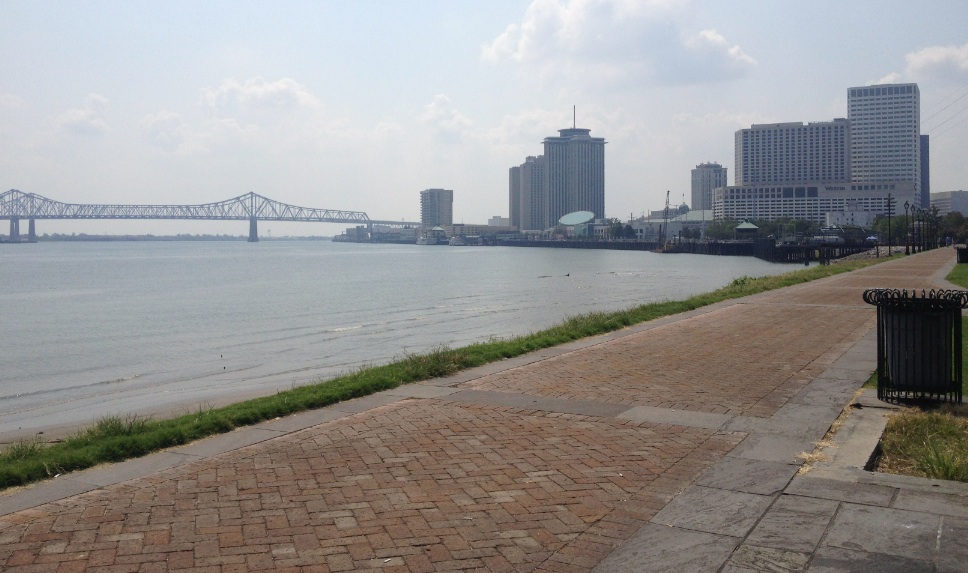 New Orleans was next, but I was one week to early for the Weezy Park, So I hit up this DIY Spot located under highway 610 at Pleasure and Paris. 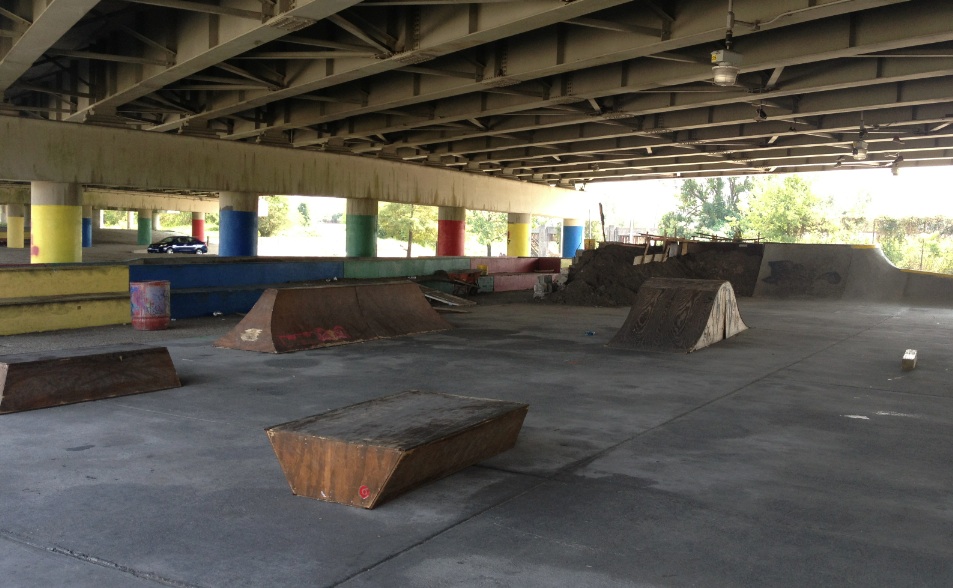 Not much left after Emerica rolled through in May, but dudes were out building some rebar and making boxes. 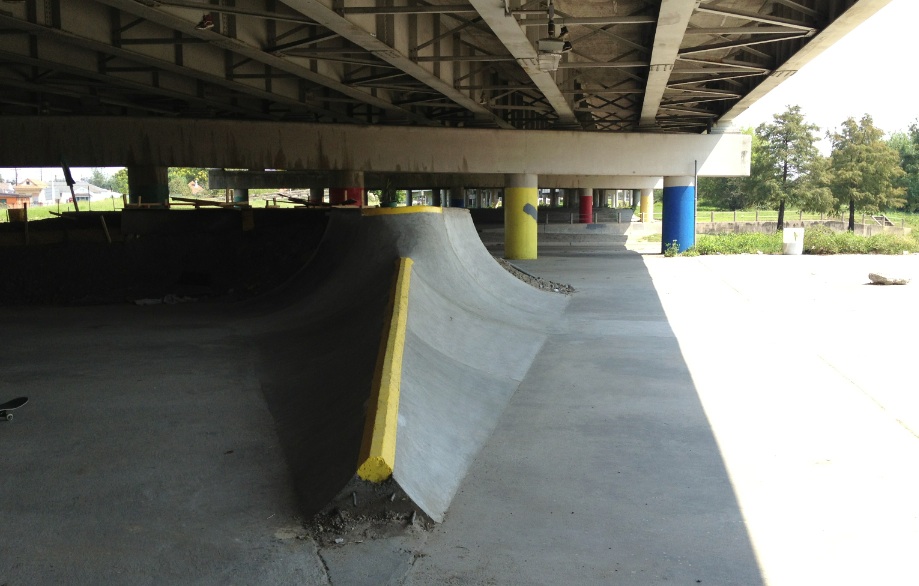 Ruff transitions as promised my mid-sized D.I.Y. ventures, but this is a work of passion and was certainly a pleasure. 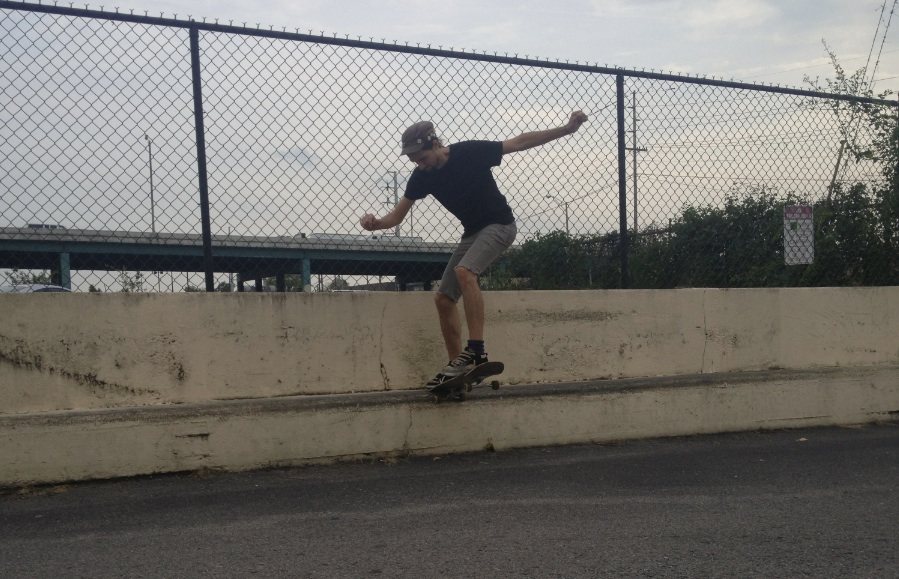 In Nashville my buddy Sean showed my these local ledges which we tore up for a minute. 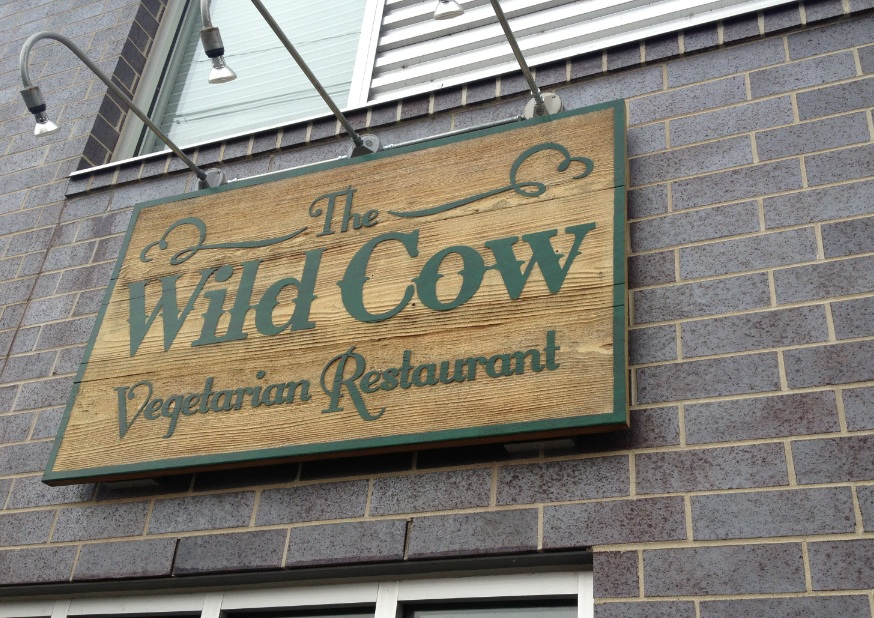 Afterwards we hit up Wild Cow for The Beehive Night. 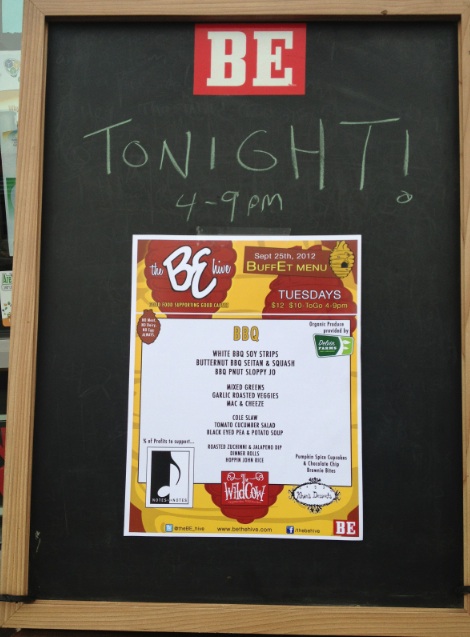 Tuesday All you can eat Vegan Buffet.  Best $12 dollars I spent this whole trip. 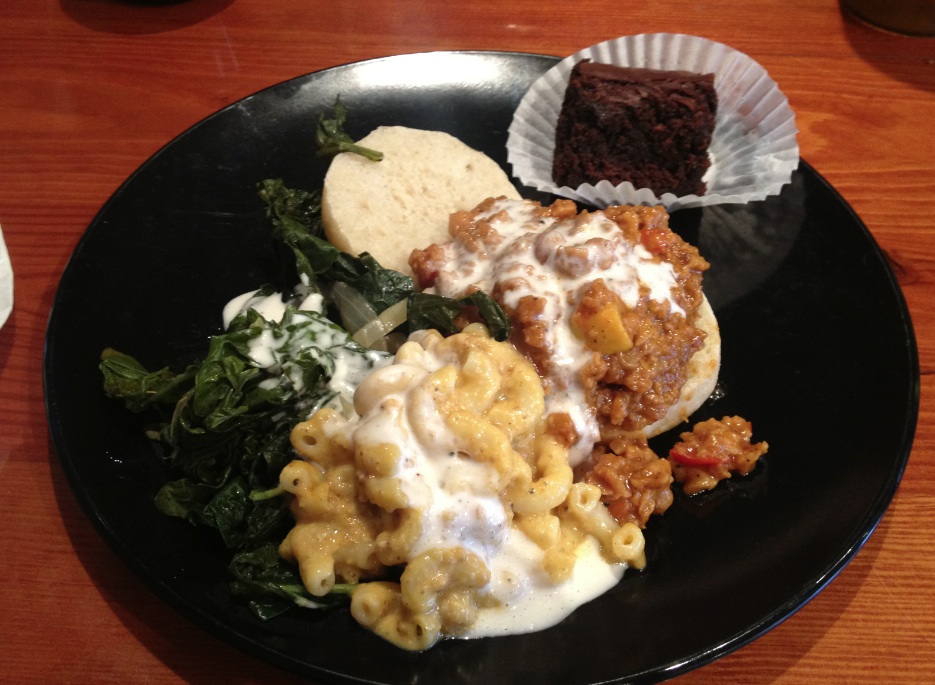 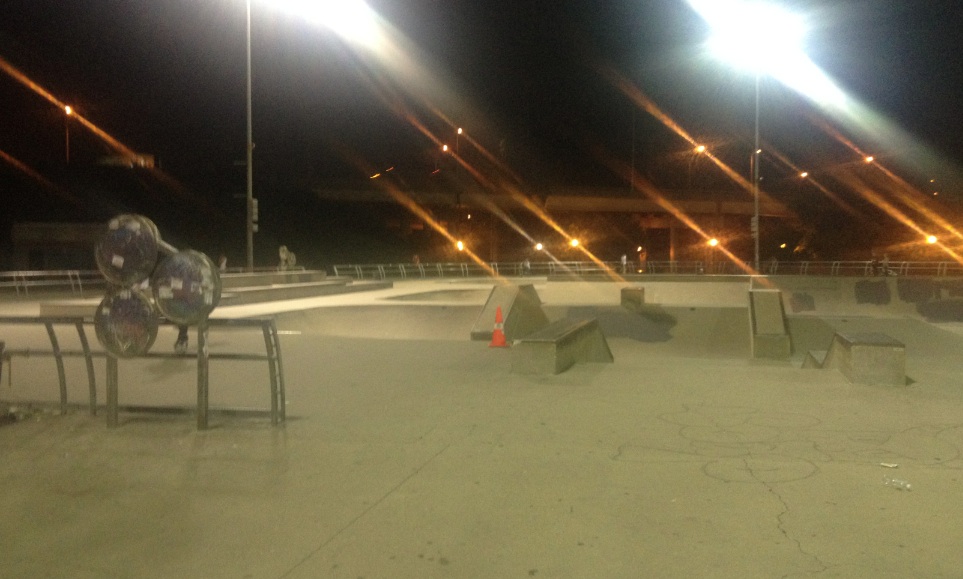 Louisville Extreme Park was the last stop before the epic rains flooded out every other stop along my path to Pittsburgh. 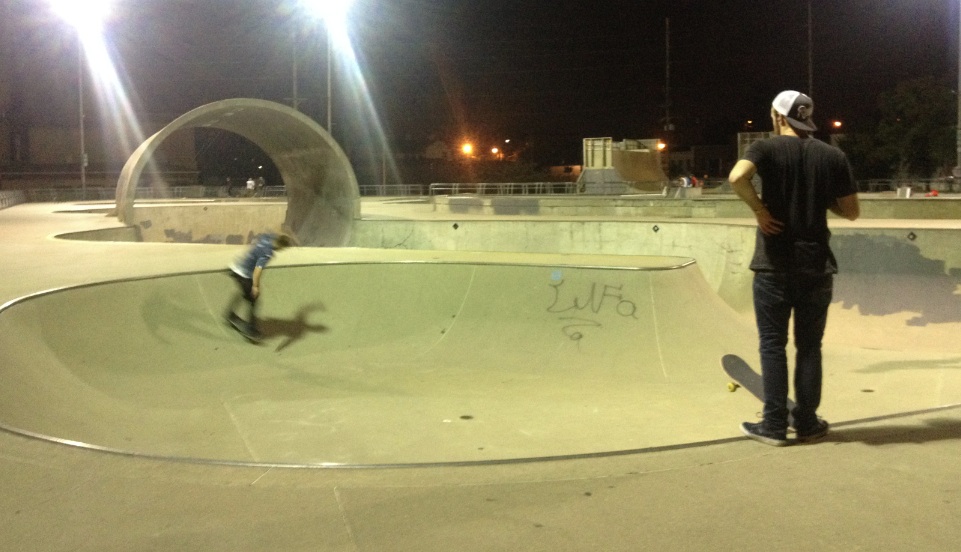 Open till 11. Transitions, bowls and banks until you want to cry. Thankfully only 5 hours from Chicago. I’ll be back soon.

A big thanks to everyone I stayed with, ate with, or skated with on this trip. Tom and Alyssa, Michelle and Brad, Christine and Kristopher, Alison, Jimmy, Eliot, Doctor Astronaut (Mutt of the Future), Rachel and Rachel’s Mom, Anti-Social Skateboard, Mike and Kelly, Becca, Juliet, Pizzolo, Sean, Miranda, and Claire. You people make everyday worth it.

4 Responses to the south, and heading east…