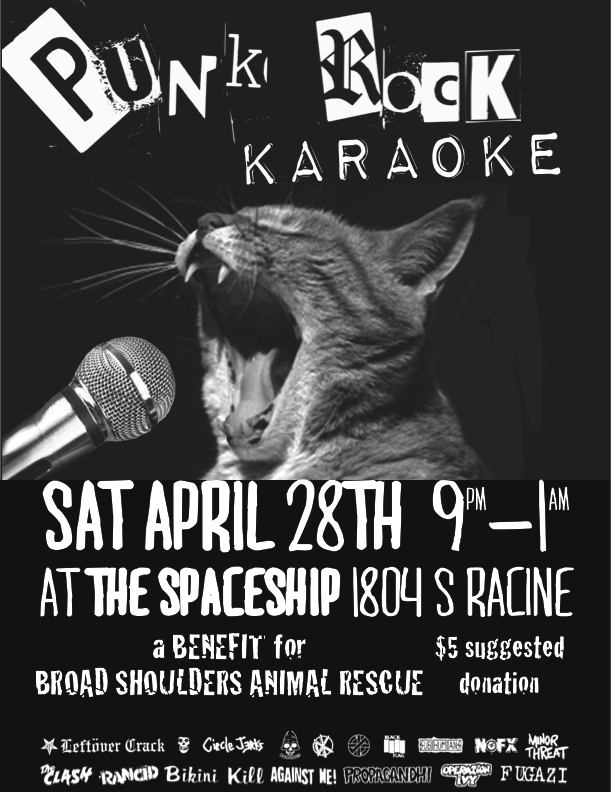 Broad Shoulders Animal Rescue and Punk Rock Karaoke Chicago are teaming up this Saturday to host a night of singing and fundraising! If you have no clue about Punk Rock Karaoke Chicago, its a pretty easy concept. Its Karaoke, but all your favorite punk rock songs! Sounds like fun, I know.  Broad Shoulders Animal Rescue, is a local no-kill animal rescue organization. They place unwanted companion animals with permanent loving homes. The organization is run by some seriously awesome Animal Rights activists who have been kicking some serious ass for the puppies and kitties of the Chicago-land area since 2008.

This Saturday, April the 28th @ Spaceship 1804 S. Racine. 9PM-1AM  $5 suggested donation at the door. There will be vegan baked goods & TAMALES for sale to benefit the rescue, and for $3 you can make a Broad Shoulders board member sing ANY song you want!

I spoke with my buddy Jay, one of the masterminds behind Punk Rock Karaoke Chicago.  Jay has been involved with Animal Rights and the Chicago hardcore scene for over a decade and has been Vegan since 1999. He currently live in NYC and plays in the Vegan StraightEdge band XLions of TsavoX. He also recently filed a lawsuit against the government over the Animal Enterprise Terrorism Act (AETA). Read more about that here.

Mr. Fakie So you and some friends put together a Punk Rock Karaoke, Who was involved in this?

Jay It started with five of us, my friends Rob, Patrick, Joe, and Belinda kinda got it off the ground with people coming in at various points. Rob has since left the project and I have moved to NYC, so it is kinda spreading and growing, but those were the folks that really got it started.

Mr.F. Why did you guys decide to put this together?

J. Well, I think we all had at least some connecting to the punk scene in general and saw this as a really cool way to both put on really fun events that we knew punk kids would go crazy for while also building community and highlighting/raising money for local activist groups. I know for me, if it wasn’t for the politics I was exposed to through punk I wouldn’t be where I am today and this just felt like a really cool way to connect punk kids with radical politics and build up both the groups we care about and the punk scene we believe has potential to really help grow and fund the groups that are fighting to make the world a better place.

Mr.F. They are super fun, and singing Straight Edge in a bar is classic.

J. Yeah, it is really funny to see the different sub-genres all come together in a bar. sXe kids taking the stage right after drunk punks sing Blatz is always really cool to see.

Mr.F  Now how did you put this all together? Usually karaoke is all computer midi-music, but I’ve been to these and it sounds like real recorded instruments.

J. Yeah, Joe who was one of the people who helped start the project also runs Mystery Street Recording Studio on Lincoln Ave and he has helped out with studio time to actually make the tracks. Usually it is still a drum machine in the background, but the guitar and bass is all either Patrick or myself playing the instruments. One it just sounds way better than anything midi can do to use live instruments and also, it is really a ton of fun to get together and just play all your favorite punk songs in a studio. Not that it wasn’t also a ton of work to create, but it was for sure fun in addition to being very labor intensive.

Mr.F  I was really surprised how awesome it sounded and you guys where super accurate. It felt like being in a high school punk band playing covers. Then you guys added the lyrics by hand? How tuff was that, especially with how fast some of the songs go?

J. Yeah, both Patrick and I are kinda perfectionists and Joe is really good at using studio magic to match up the amp sounds, we try and get it as authentic as possible…..God, adding lyrics is by far the most tedious part of the process. It is just so tricky and time consuming to get it all on there perfect. I made the mistake of saying we should add “Institutionalized” by Suicidal Tendencies and I will forever regret that. I love that song, but seriously, I did a word count and I think it is over 5000 words or something insane like that, and I had to sync all that up to the music just right. It was hell. It isn’t so bad now, but in prep for our first event, we had so many songs to do, that neither Patrick nor I slept for like 3 days before the event. It was just non-stop lyrics for three straight days.

Mr.F The night at Beauty Bar when that women did Institutionalized, man, you have to be one a dime with that song. That was hilarious after awhile she just started babbling.

J. Yeah, I have yet to see anyone nail that song. Everyone always gets the Pepsi part though.

J.  Oh man. It is hard because I always try and let other people do the hits, but if I could just get up and do my top 5 I think it would be, in no particular order:

1: Propagandhi – Nailing Descarte To The Wall

2: At The Drive In – One Armed Scissor

4: Crass – Banned From The Roxy

But honestly, that list could change at any second, that is just off the top of my head. Every time someone sings a song that the crowd goes nuts for, that song is my favorite for the 2 minutes it is playing. I can’t believe i forgot Bikini Kill. That would be on there too.

J.  Oh I know. I am adding the lyrics to it tomorrow actually. I am totally going to shamelessly namedrop here, but the last event I put on in Baltimore, Arthur who played bass in Gorilla Biscuits came out and sang a Sham 69 song. It was a pretty epicly punk rock moment.

J. But yeah, doing a benefit for an animal rescue, we had to get Cats and Dogs in there.

Mr.F Excellent, Well thanks for chatting man. This is a tremendous project and has been helping out a lot of worthwhile groups. I’m getting there early to sign up for that GB song

J. Awesome. Anytime. I’m bummed I am missing this one, but I’ll be back at the end of May for our one year anniversary show. It should be nuts. Thanks for helping get the word out on the project.