I attended The Skateboard Hall of Fame and a screening of “Bones Brigade: An Autobiography” this weekend as part of the IASC Summit. Lots of great stuff came out of it, and I’ll be posting some interviews in the weeks to come. I wanted to share some a couple photos. 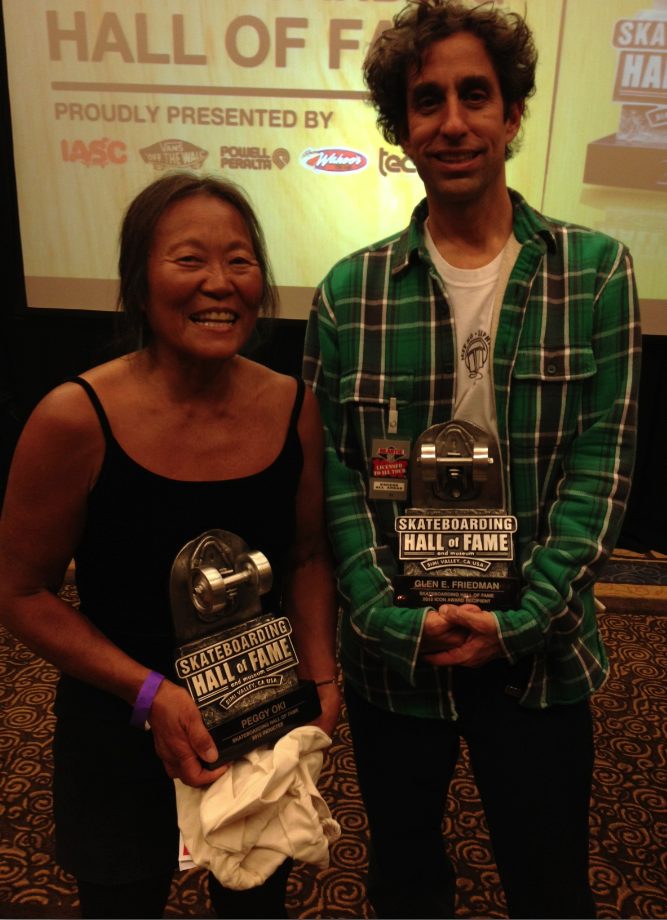 Peggy Oki and Glen E. Friedman both received awards this year. Both are Vegan and activists.

Peggy was the only female on the Zephyr skate team. Like all the Z-Boys, she was a gnarly surfer. That style was foremost in her skating. While she was by no means the first girl to get onto a skateboard, her approach to the skating departed from the out-dated style that was dominating the contests.

Glen was there when skateboarding was turned on its side. As a teenager he documented the Z-Boys from their start at school yard banks to the discovery of pools as a skate-able surface. He documented some of the first airs out and over the coping. 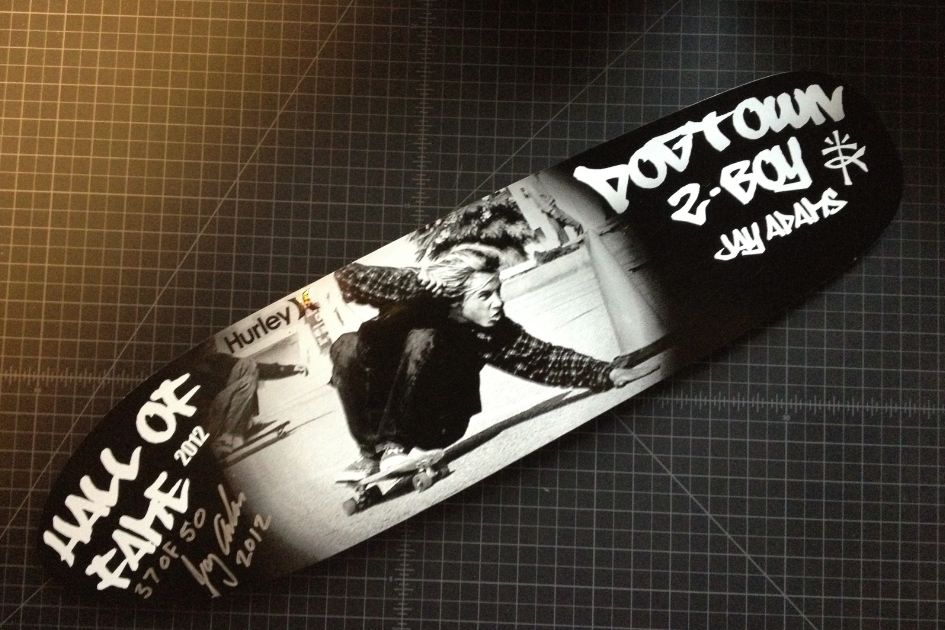 Jay Adams was also inducted into the hall of fame. He unfortunately was unable to receive the award at the ceremony.There was a silent auction and I bid on this Z-Flex reproduction that Jay signed. All proceeds benefiting the Go Skateboarding Foundation. 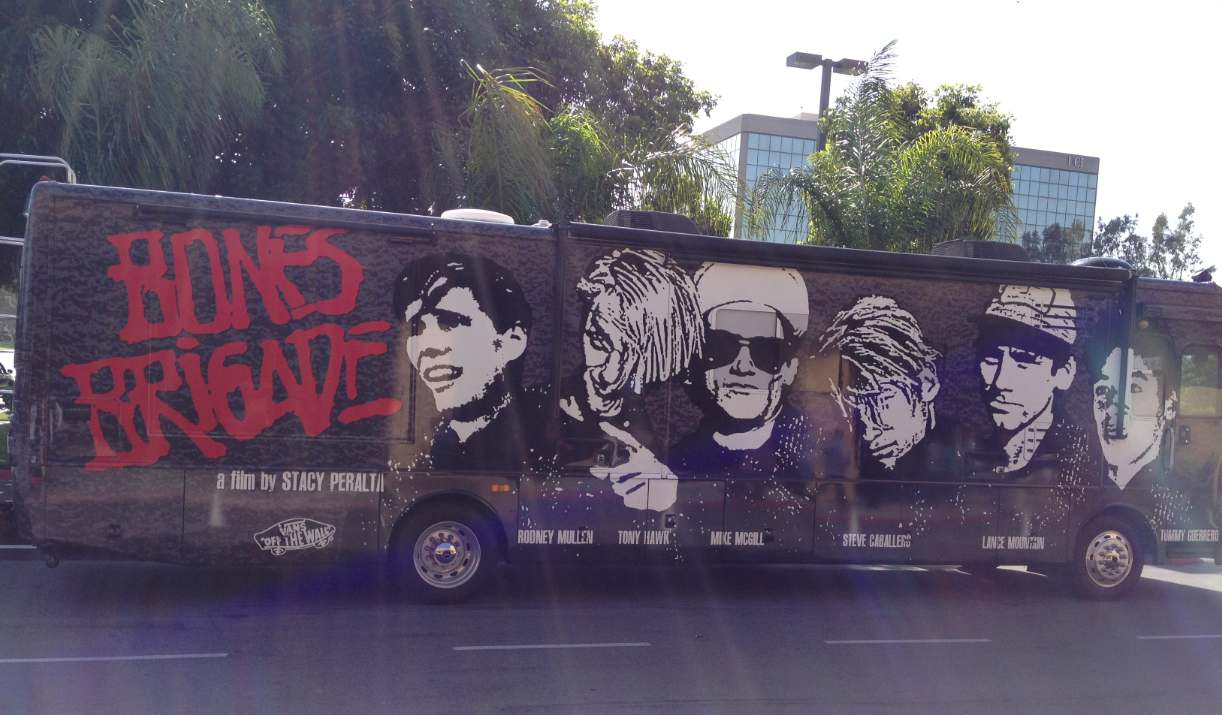 Stay Peralta’s “Bones Brigade: An Autobiography” screened for one of the first times out of a film festival. I’m sure if you look around long enough you can find some photos and maybe even video from the screening Friday night. So many people had their iphones out and bootlegging. 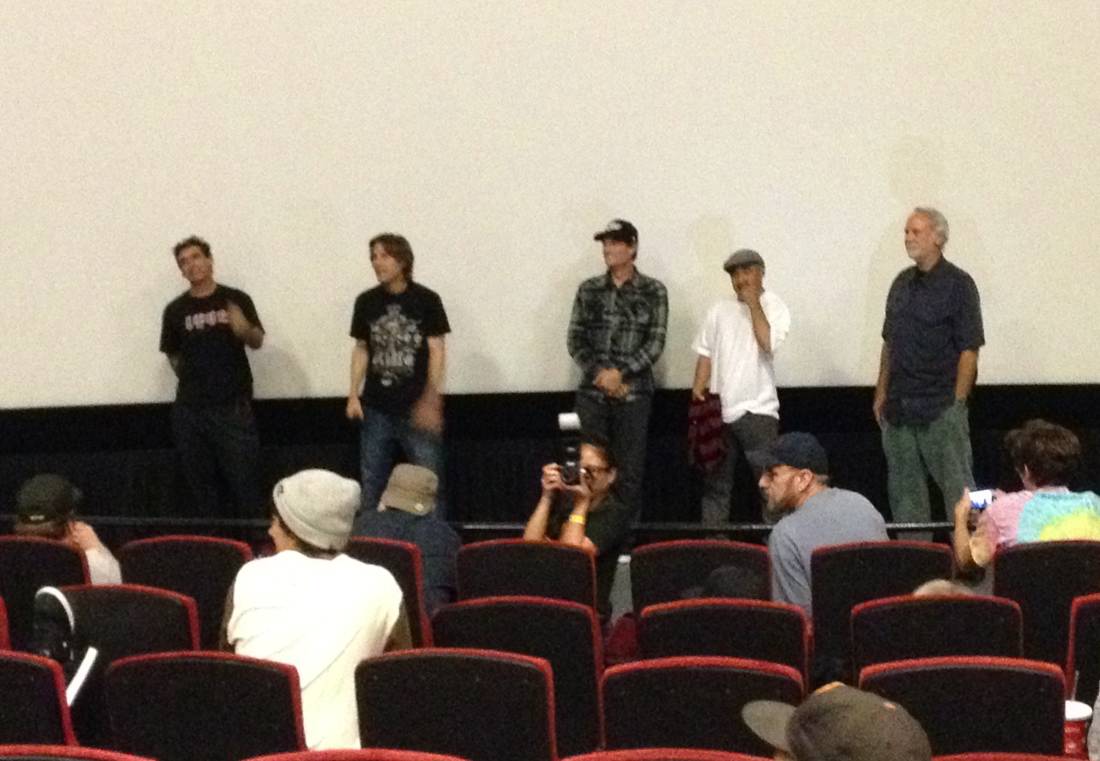 I waited until the Q/A afterwards to get some photos. (L/R Lance Mountain, Rodney Mullen, Mike McGill, Steve Caballero, George Powell) There isn’t much to give away. If your interested in the Bones Brigade, you probably already know some of the story. For a fan-boy, like myself, it was rad to hear the perspective of the people who defined a good chunk of my childhood.  Also I was sitting next to Rodney Mullen at the theater. I almost geeked.

Saturday was the 8th Annual Pro-Tec Pool Party. Unfortunately I had to get out of town, but it was well documented. Here is a clip from the Masters.

This entry was posted in Event, Skate History. Bookmark the permalink.