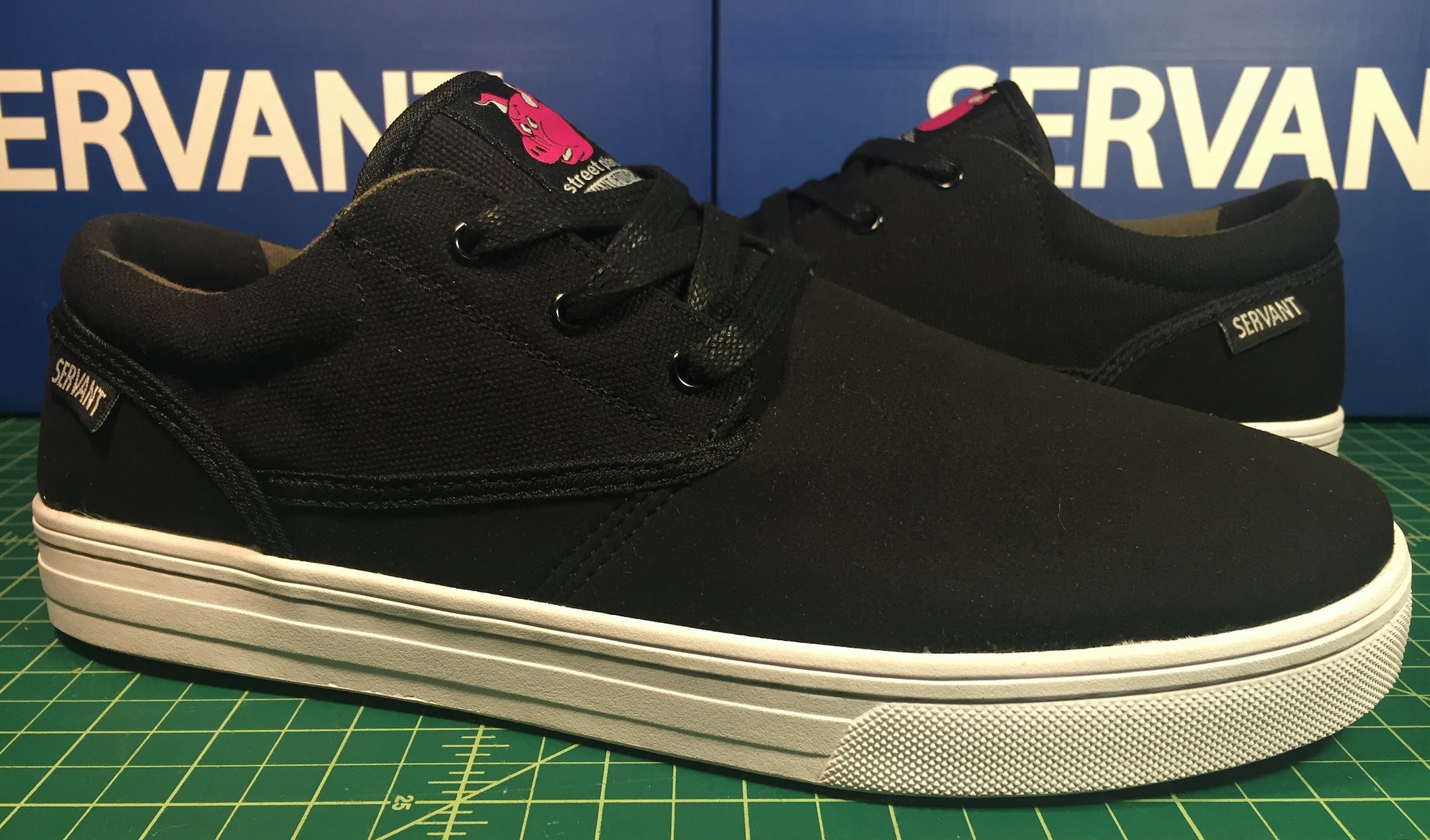 Servant Loiter Barnyard is (at this point) a very limited edition Vegan skateboard shoe. A collaboration of the Malmö based skate shoe company and Mike Vallely’s Street Plant brand, the Loiter Barnyard features art from Vallely’s iconic deck that just celebrated it’s 25th anniversary with a re-issued through Street Plant.   Servant, for who Mike V rides, upgraded the canvas Loiter with their 4-Skin Microfiber synthetic-suede – a material the company boasts to be more durable then animal based suede. 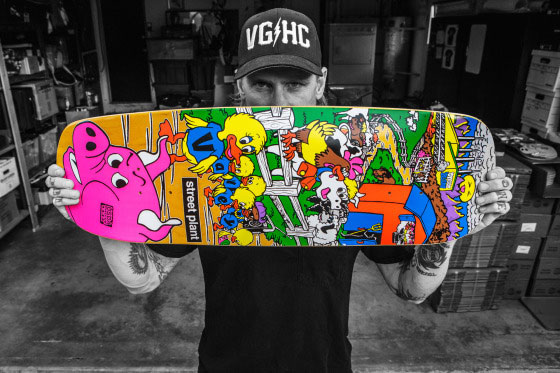 Originally from World Industries, the Barnyard Deck was an early version of the contemporary “popsicle stick” design. Mike’s concept for a pro-vegetarian message was not exactly realized in what artist Marc McKee and Steve Rocco sent to press. In the documentary, “The Man Who Souled The World” Mike Vallely describes his disappointment with what he felt was a mockery of his vegetarianism. 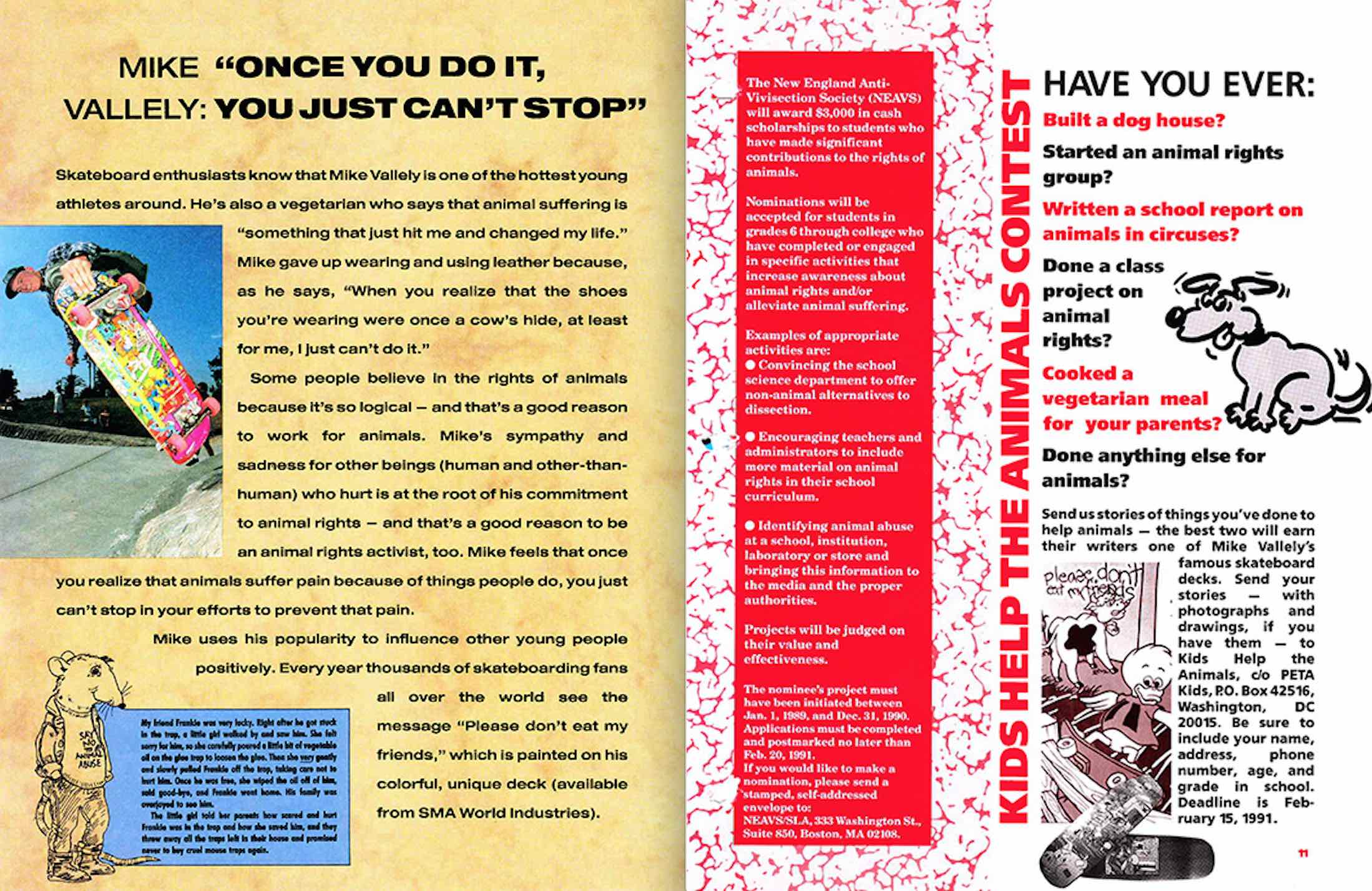 With the passage of time his feelings towards both the art and his vegetarianism have  seemingly changed.  Lucky for the vegan skaters of the world, a board that presented the message of not eating animals was produced in an all Vegan colorway! 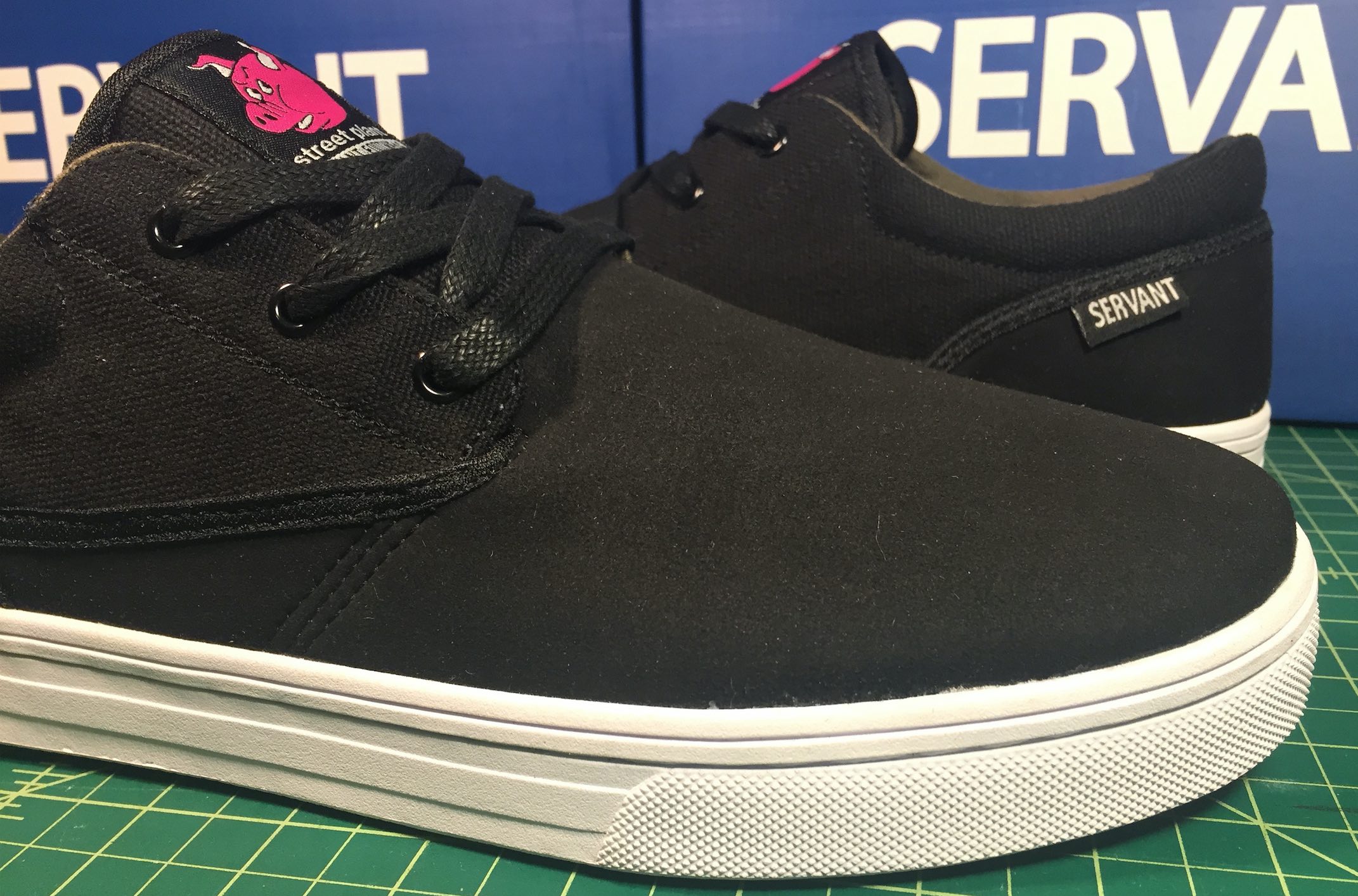 The upper is comprised of a solid toecap piece made of Servant’s  “4-Skin microfiber” synthetic suede which is over-layed and triple-stitched to a tough canvas midsection.  The shoe is a true cupsole, but it takes some cues from a vulcanized shoe due to its use of faux-foxing tape.  Light padding around the canvas collar and thin tongue may not offer a ton of protection from flying boards, but your feet will feel free to maneuver as if your wearing a slip on. 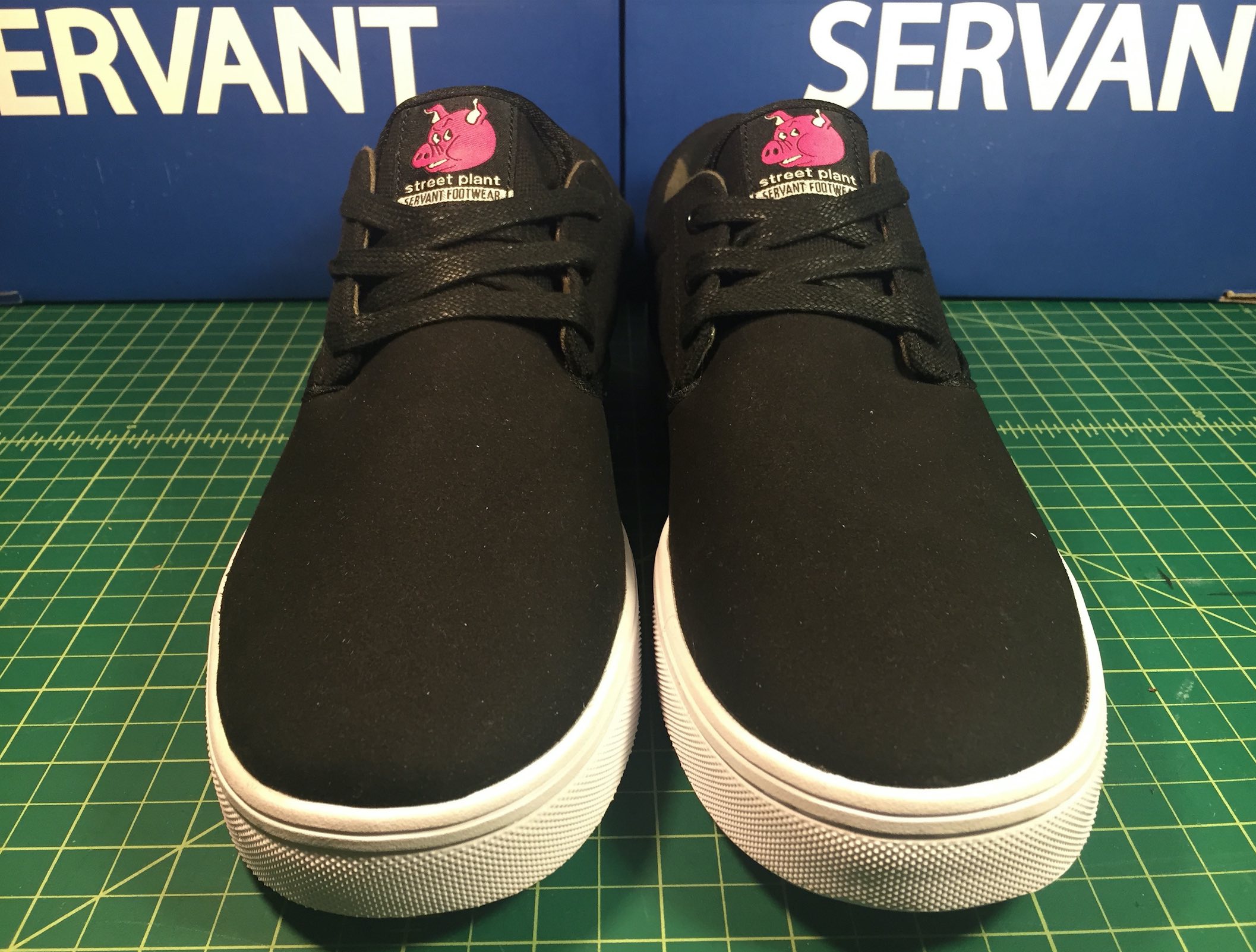 The Loiter Barnyard have a wide (almost squared) toe. If you have wide feet, these are the shoe you want. With lots of room to breath, my toes never felt sweating or squeezed. With no extra bulk, flashing, or toe bumper to get in the way, the Loiter feels light and natural on the foot. Also a pig on the tongue. That’s all you really need in a tongue detail, right? 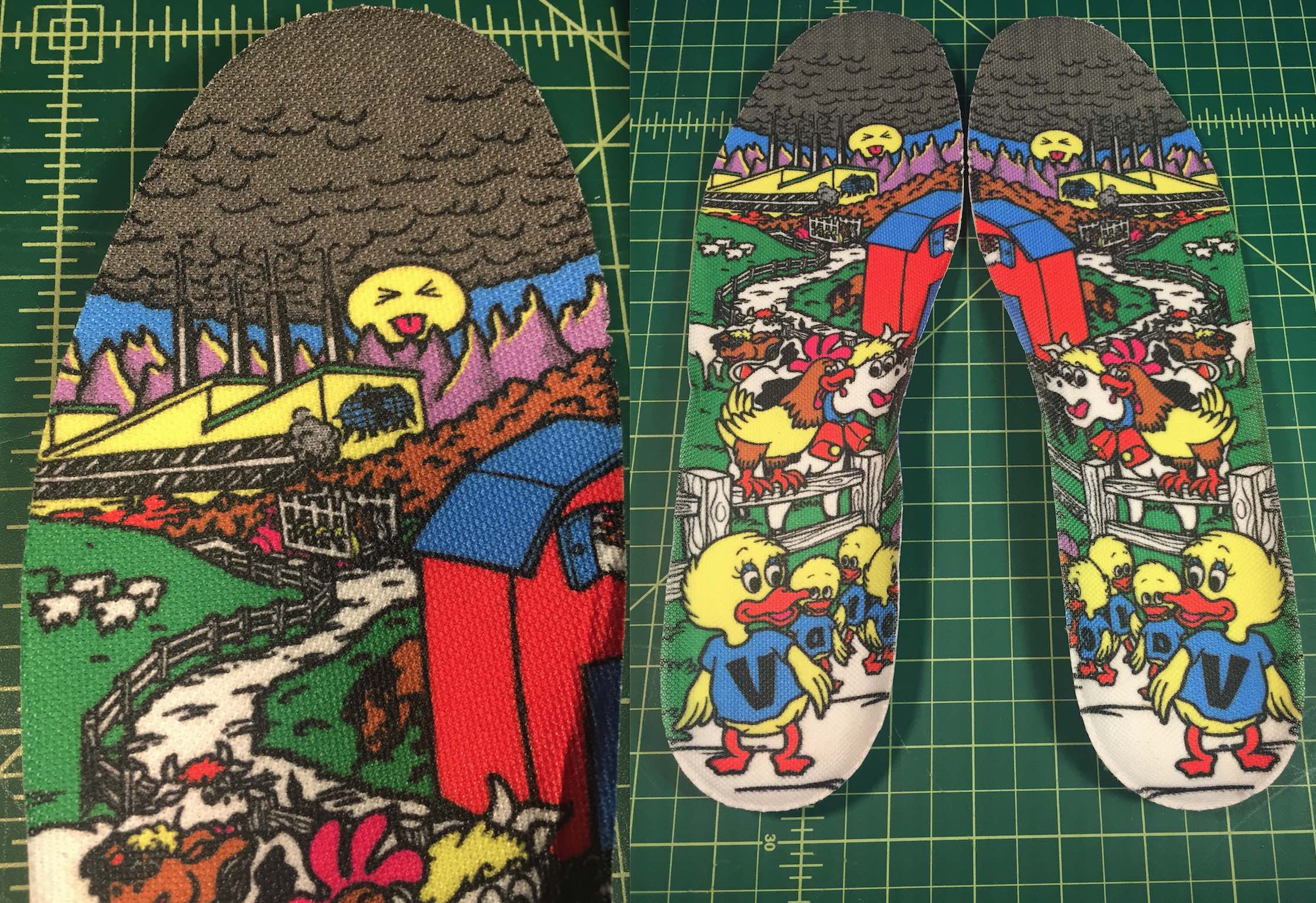 The Barnyard art is mirrored on the insole, with the exception of a missing detail from the original board-art: a flock of chickens dropping an anvil on a pitchfork wielding farmer below. 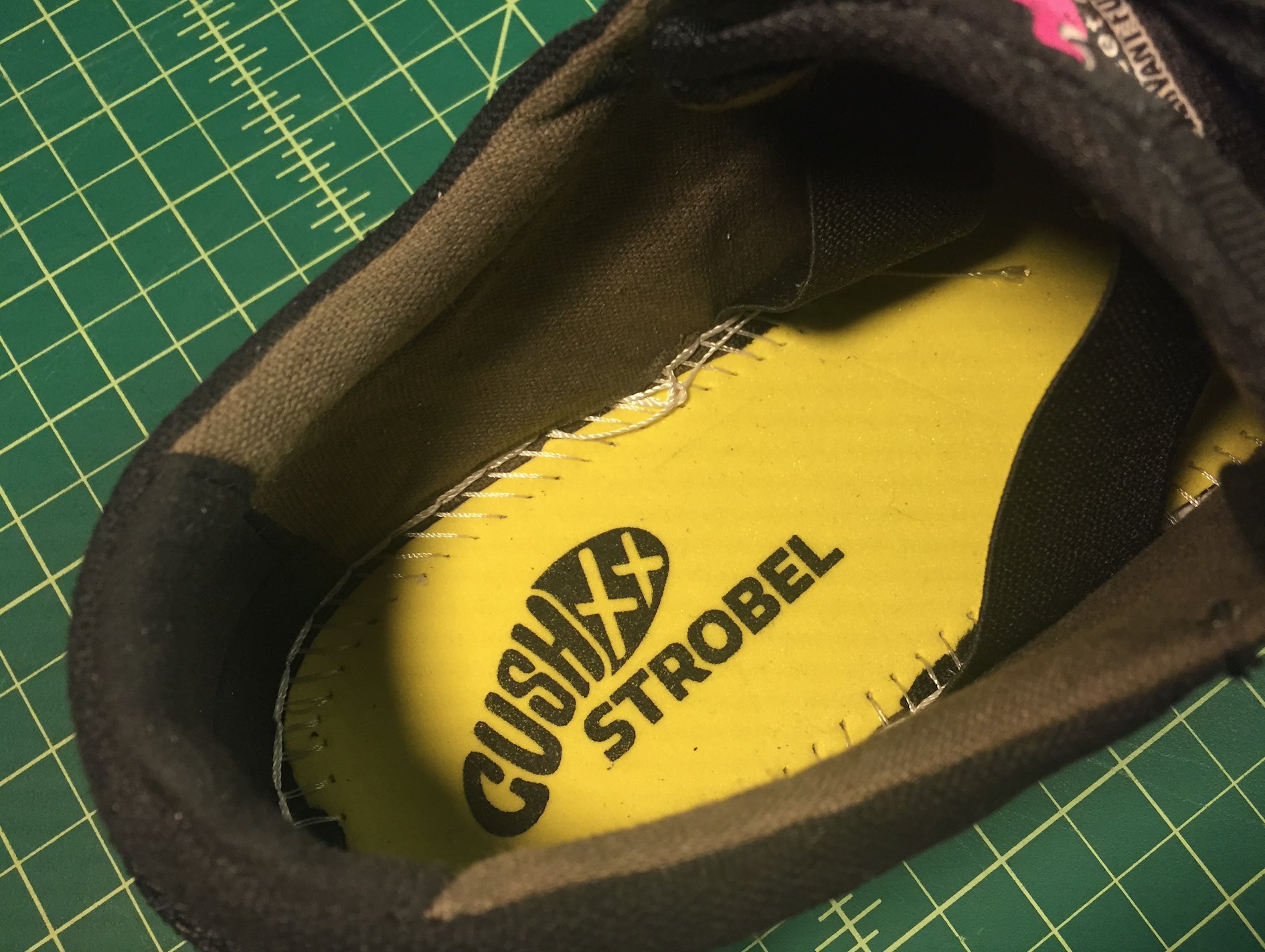 The “Cush Strobel” footbed is the the same as the Dagon and offers some serious impact protection. Even after several weeks of skating they still retain the forceable feedback to keep the heel bruising away. The faux-suede detailing at the back of the collar adds some protection against ankle burn. It also makes jamming your feet in (without lacing) so much simpler.  Two wide elastic bands keep the thinnly padded tongue nice and snug.  Even when your laces come undone, the Loiter stays right where it should. 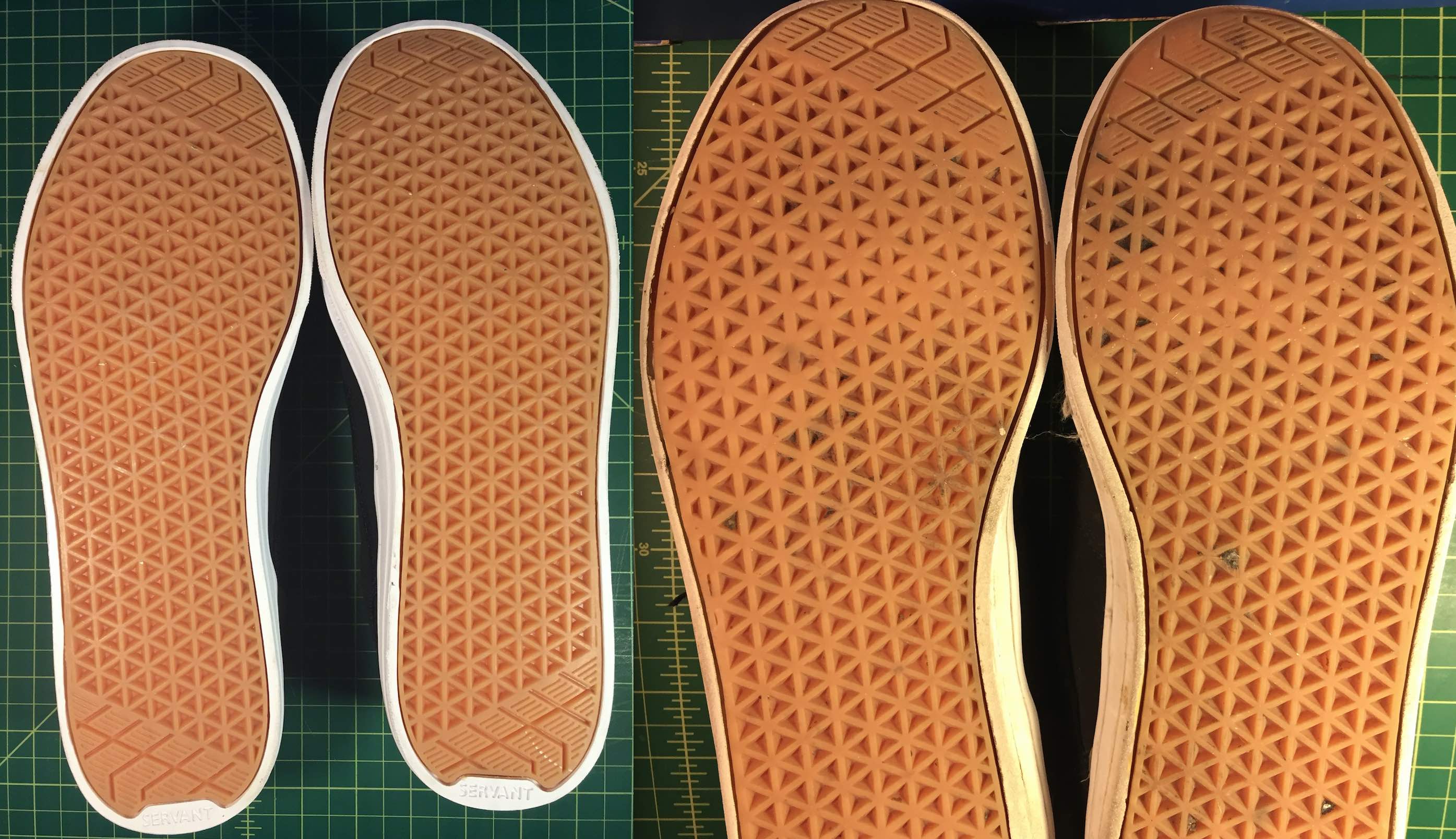 The business end of all Servant footwear has a rad hexagon/triangle pattern that grips super well and flexes even better. Grab a pair and right out of the box they’re easy to bend back and forth. Though no real break-in time is needed here. The left image shoes the Loiter Barnyard straight out of the box and on the right is after 7 weeks of wear.  Plenty of tread to go before they’re eating away at ball of my foot. 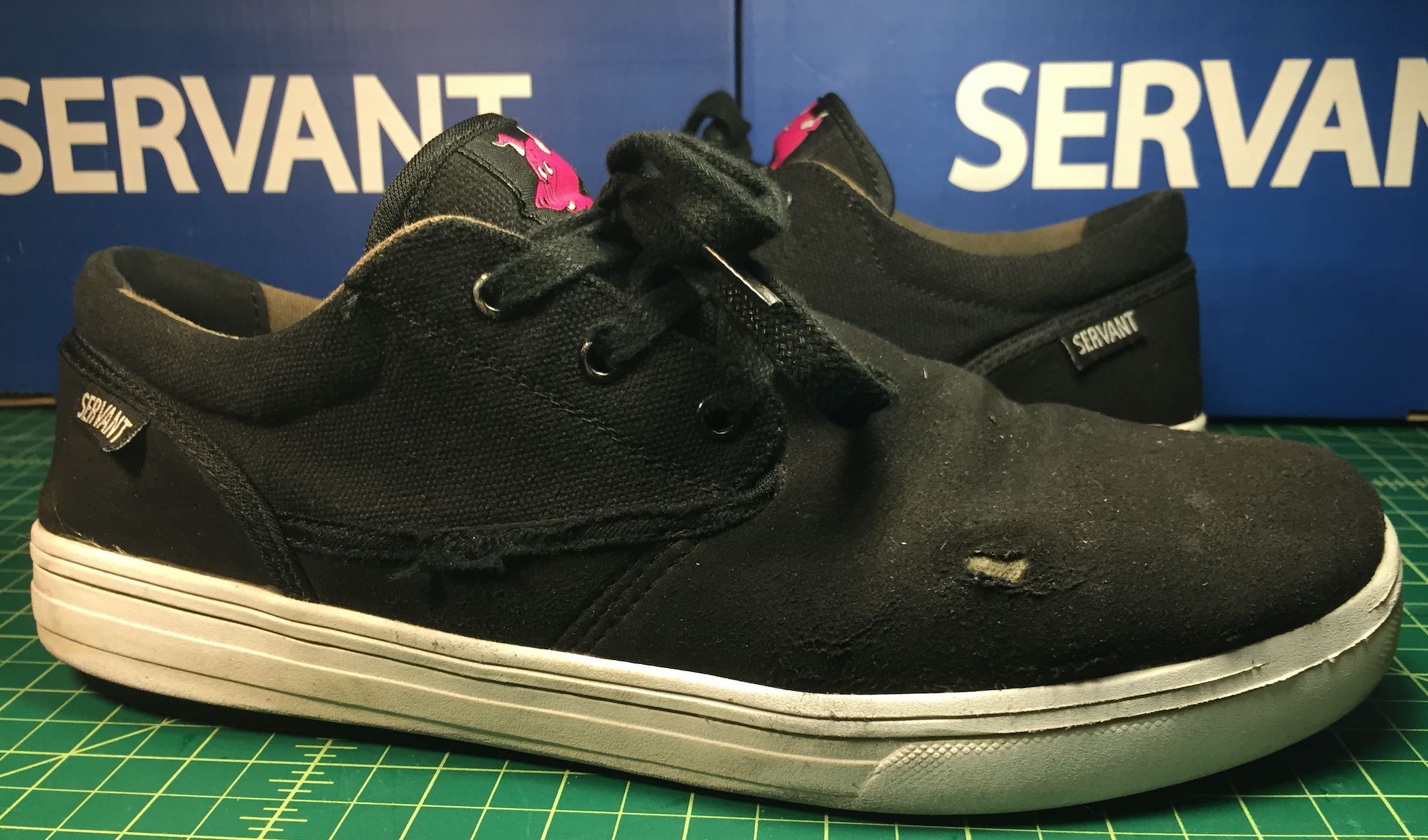 The Loiter Barnyard after several weeks of skating has just started to peak into the lining. The 4-Skin microfiber is still as soft as the day they came out of the box, which makes them feel great when lacing up. None of that crusty shoe you get when sweating it out at the session.  Notice the side panels are starting to rip a little, but the triple-stitching is still holding 100% and well clear of any serious wear areas. 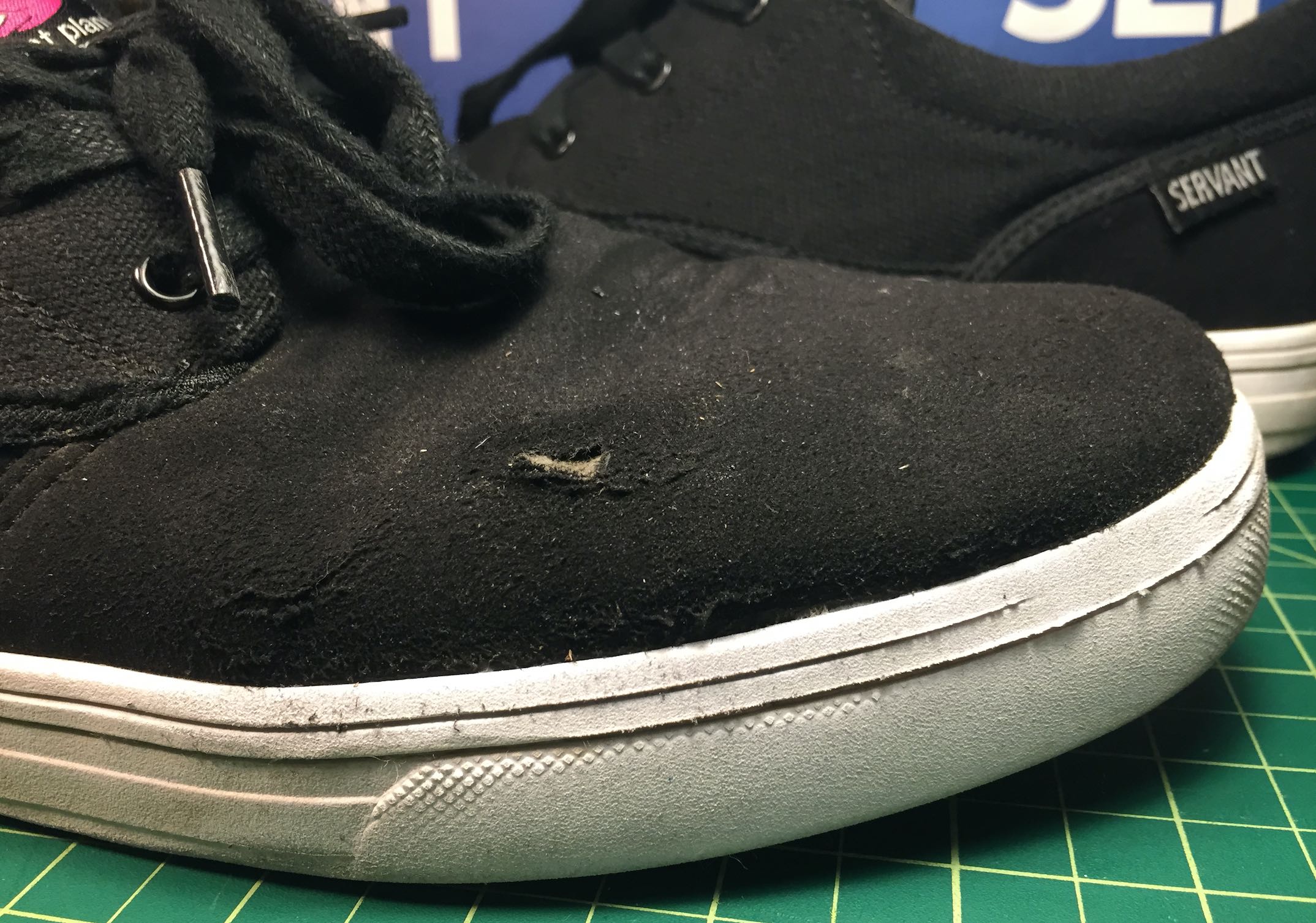 After weeks of skating the whole did begin to open up a bit more then in the above picture. Though at this stage we could have easily dabbed a little Shoe-Goo and saved the Loiter. 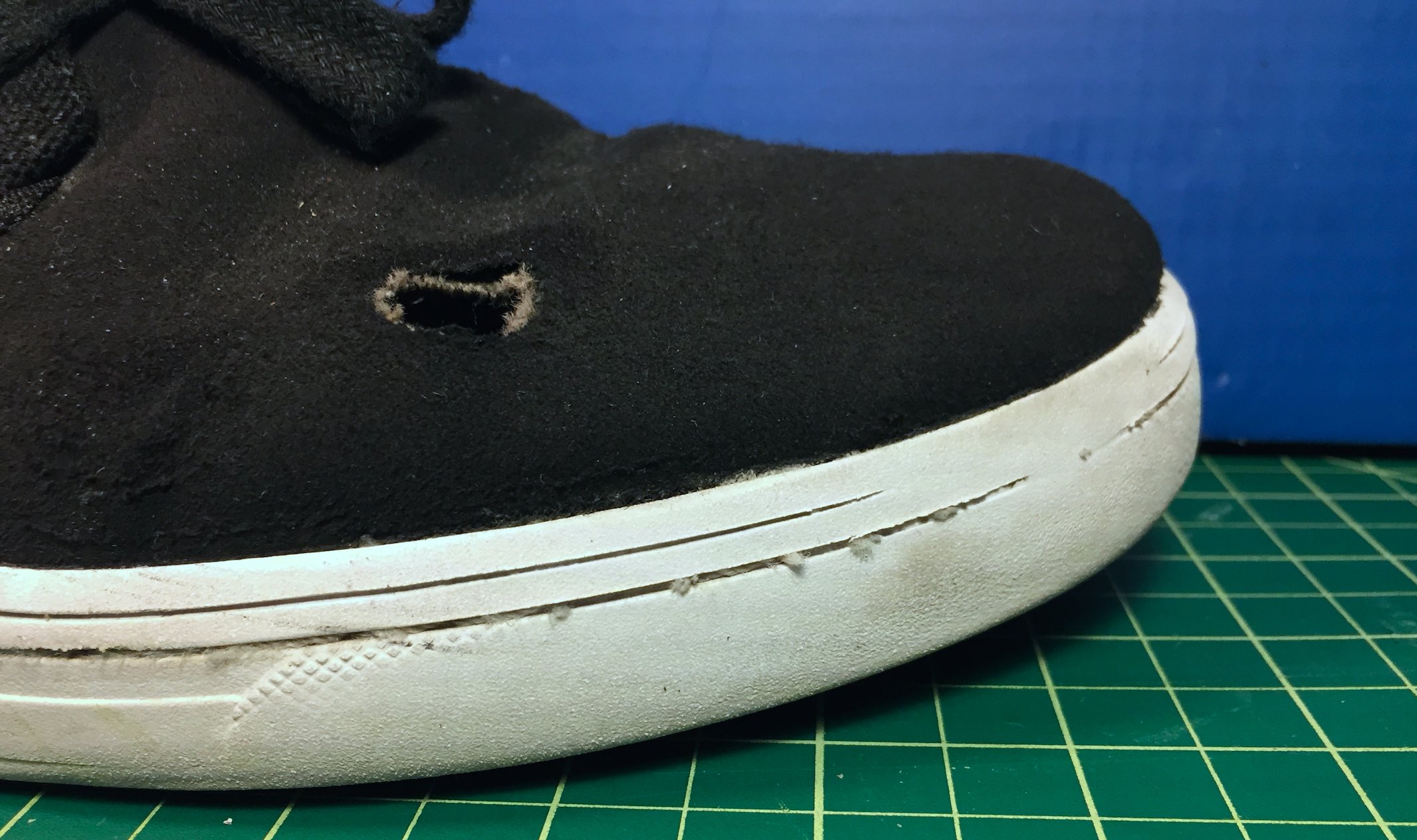 Another week after the first whole started to open up, its a gaper!  Servant makes a hell of a shoe and the Loiter Barnyard held up much longer then any other shoe we have reviewed, aside from the Servant Dagon which has a bit more lining in the toe. In total the shoe was skated for nearly 10 weeks total!

The final verdict. Get online and order a pair now! Maybe two, maybe three.  The fit is a little larger then you may normally wear. In other words, you may want to go down a half or whole size.  Though Servant has a handy size finder guide if you want to be sure. We had serval readers report on the Dagon to be a size to two sizes bigger then they expected.  The good news, though Servant is really only available in the US through the manufactures website, they’re shipping from with in the states and returns are easy.   Get a pair while you can, and take advantage of the sweet price.