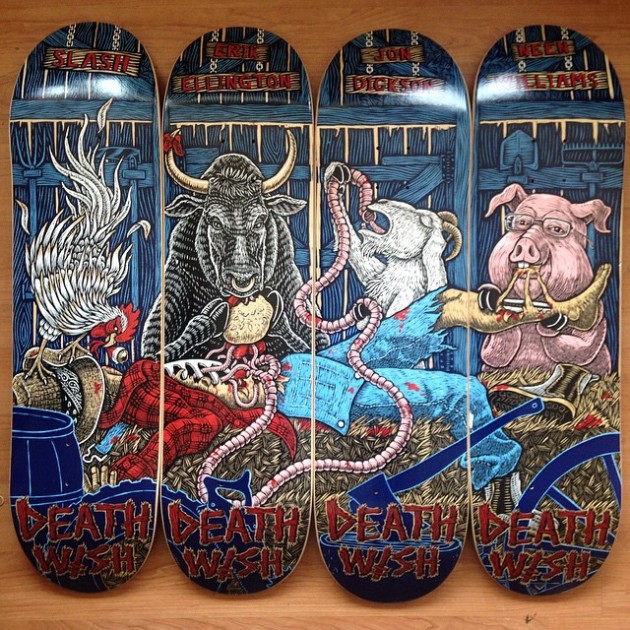 Dylan Goldberger is an artist based in Brooklyn, NY. He’s been creating art for skateboard companies (Coda, Deathwish and Hopps) and shops (2nd Nature and KCDC)  all around the New York area for several years. He also rides for Coda, Prizefighter wheels, 2nd Nature, and is on flow with Vans.  At twenty-six, Goldberger who in his skate career used to go by Dylan James, proves if you can make it “here” (that being New York) you can make it “anywhere”. His most high-profile gig to date is the current release of Deathwish decks, titled the “Delicacy Series.” George Orwell’s, Animal Farm and other derivatives of animals-cum-tormentor, might be the first thing that comes to mind when seeing the series.  Revenge is not a new subject for Dylan, just check out his site! After seeing the decks on Deathwish’s Instagram and getting a few emails about it, I reached out to Dylan to talk about art, animals, and skateboarding in New York.

The Retribution Series (and Delicacy Series) covers a lot of territory; animals used for food, hunting/fishing, sled dogs and horse carriages.   Can you go into detail about these issues and what they mean to you? How do you feel about non-human animals being used by humans?

I think my earliest realization of my love for animals comes from being a little kid and watching movies. I would feel little emotion when a human died, but the second an animal passed or was even mistreated I would start balling my eyes out. I’m not trying to pretend to be a huge animal rights protester, heck I’m not even vegan, but I do love animals and enjoy being able to give them advantages over humans through my illustrations.

You’re from Westchester, though it’s close to the NYC, its strangely rural and there is hunting and fishing around those parts. Did you ever have exposure to hunting, friends/family?

No, my family was never into hunting. I went fishing a couple of times with my dad, but wasn’t really into that either. I enjoyed going hiking and exploring with my parents and dogs, but besides that I was mostly hanging out and skateboarding in the cities of Westchester (County).

Do you think people look into the issues that your series is talking about? I imagine vegans or animal-rights oriented folks get psyched on it and fan out. Does anyone get bummed and have defensive comments about it?

I started the Retribution series by accident in 2010 while I was still in school with my Last Supper piece. I just thought the animals eating a human role reversal was comical, but when I brought it in for a critique it started a whole discussion in the class about animal rights. Since then I have been making many illustrations with similar themes. A lot of vegans and vegetarians get pretty stoked on those pieces, but I feel like for the most part everyone finds some humor in them. Occasionally I’ll get someone bummed on the violence towards the human or something dumb like that, but thats when you just have to say, “yeah. ok. whatever.” and ignore them. 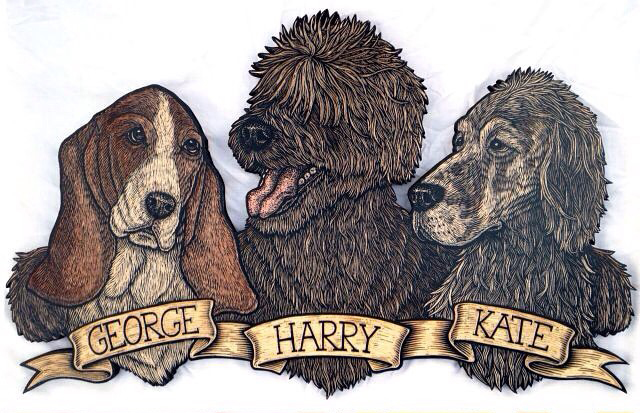 Maybe its speciesist but dogs are the best companion animal. Who were some of the important dogs in your life?

I grew up always having a family dog. Kate the english setter was already there when I was born. Next was George III the basset hound. George and Kate have since passed, and now my parents have Harry, a Wheaten/Rottweiler mix that kind of looks like am Irish wolfhound. I currently don’t have a dog, but I think about getting one everyday. 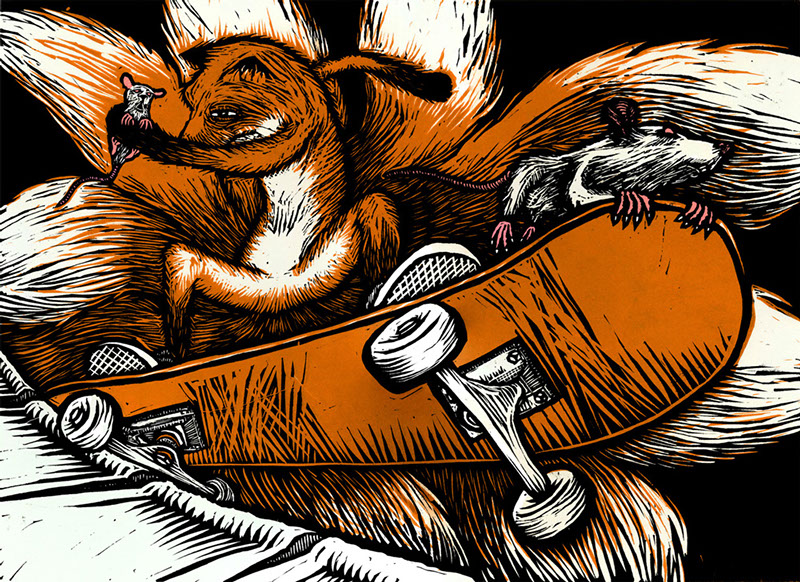 The animals in your art are whimsical, anthropomorphized and yet still very much true to their animal form.  Did you have some illustrated books that influenced you as a kid?

I think one of my greatest influences has been Disney. I loved all the animated films as a kid and had an art of Disney book I would copy drawings from all the time growing up. I still will look up Disney character sketches as reference when I can’t get something to work how I want it to. I have an amazing book of the drawings of Heinrich Kley. He brings so much movement and personality into he animals while keeping them pretty autonomically correct. Kley was actually a huge influence on Disney’s Fantasia. Peter de Sève is another artist who’s animal characters I greatly admire.

There are a lot of distractions in the city, what kept you motivated to finish school?

I didn’t really find school that challenging. It was definitely a ton of work, mostly it was work I enjoyed doing. Maybe I wasn’t 100% invested my first few semesters but thats how most freshmen are right? My biggest distraction was skateboarding for the first few years. Being  in a new city, all I wanted to do was go explore a different street everyday and find more stuff to skate.

Did you go to the city much as a teenager to skate?

We would go into Manhattan a bunch and skate all over from Grand Central to Battery Park and back, but did’t really start venturing into other boroughs until senior year of High School when people had cars. I definitely had a pretty good sense of direction and where some spots were by the time I moved to Brooklyn.

Any gnarly stories commuting to skate on the metro-north or subway?

One of the first times I was riding the subway when I moved here, I got off the G train and some dude that was making a racket the whole ride on the train comes stumbling off behind me. He makes it just outside the door and starts swaying all around. He starts falling back and ping-ponging off the train as its pulling away and as soon as theres no more train he falls strait backwards, stiff as a board, onto the tracks. At this point everyone on the platform thinks he’s dead, but he starts to get up and his forearm is so unbelievably broken it looked like a Z. With this terribly mangled arm he tries to climb up out of the tracks putting all his weight on it, you could hear it breaking more. I couldn’t take it any more and left.  I’m sure there are a million other things I can’t seem to think of on the spot.

Did you get to the Brooklyn Banks or the Autumn Bowl before it was over?

Those were probably my two favorite spots to skate in the city. I would come down from Westchester for events at the banks and once I started going to school here, every Friday I would skate over the Manhattan bridge to the old LES park and then go to the banks. I had not been to the bowl before I moved here, but had always wanted to. I met Andy Kessler a year before he passed away and he was the first person to bring me to the bowl. I loved that place and was able to find my way in there multiple times a week up until the end.