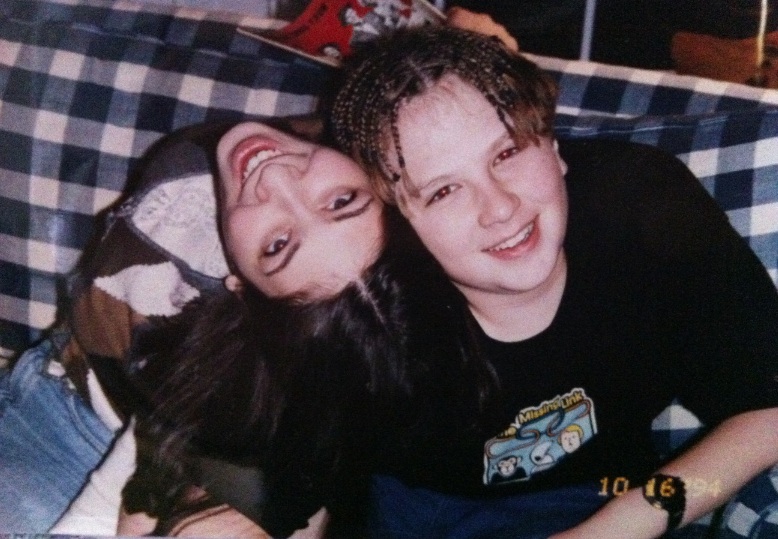 300 posts on the Vegan Skate Blog!   Above is a photo of me and my sister, nearly 18 years ago. The two of us were simultaneously trying to kill one another and discovering new music and subcultures together. She is 3 years older, always hung out with a crowd of kids older then herself and always took me along for the ride. By proxy I was introduced to skateboarding, music, and all kinds of crazy shit extremely young.  As soon as she got her license we would go into the city for pizza and shopping sprees funded by the credit card we regularly swiped from my dads wallet. The Alien Workshop shirt I am wearing we bought at a now defunct skate shop in the South Side of Pittsburgh with the illicit credit card.

Everyday since July I have been posting something that has meaning for me, in skateboarding, veganism, activism, music, etc. I’ve felt a passion for skateboarding for most of my life, and that has only been reinvigorated since starting this blog. For that reason I thought I would share a little bit of myself, despite the embarrassing factor of this photo. I was a fat 13 year old and the braids didn’t help much. What can I say, it was the 90s!

Regardless, here is to 300 posts, and 300 more. We’ll be posting a new verity of stuff in a few weeks. We’ll still keep posting four vegan skate shoes on every page, so don’t sweat. New stickers are going to be coming very soon, t-shirts, and maybe a VSB deck!

This entry was posted in Skate History. Bookmark the permalink.