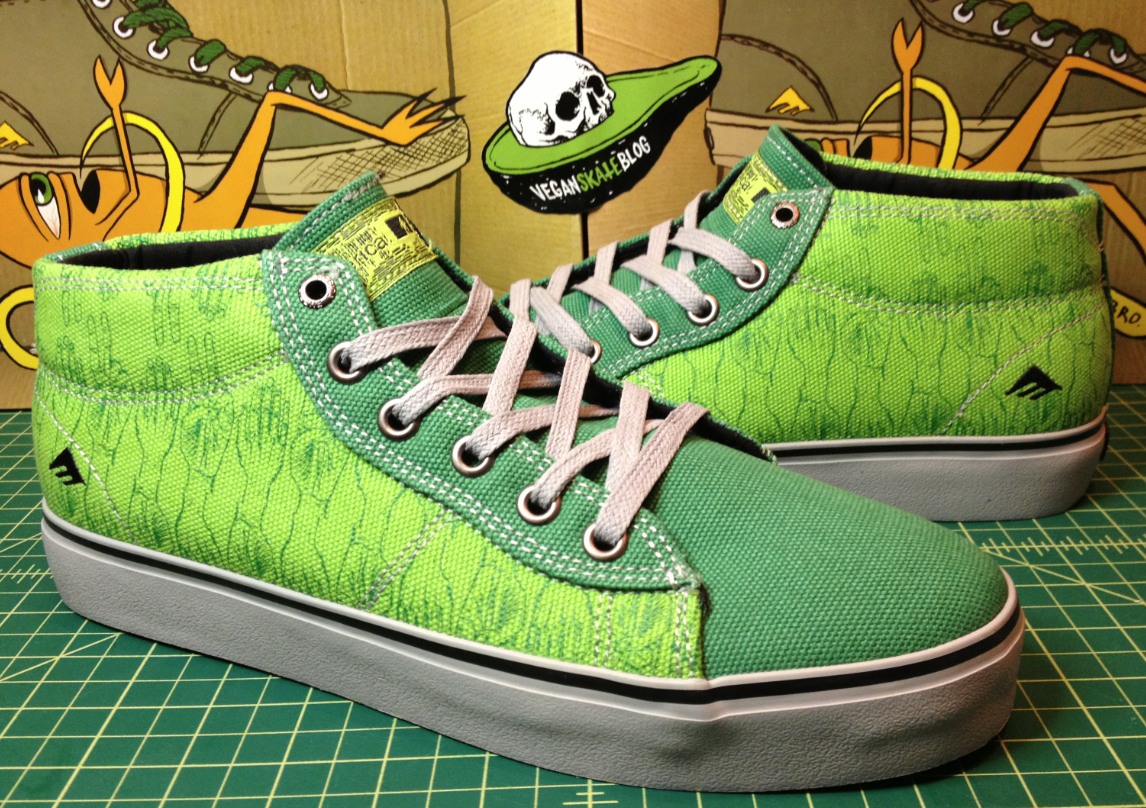 Emerica’s, Tempster is Ed Templeton’s latest skate shoe and VSB profiled the shoe heavily this year. Take a look at the shoes fresh out of the box if you missed our First Look! Now we’re looking at how the Tempster held up! This high top only comes in vegan colorways because Ed always holds it down for the animals.   The Tempster is made of a 20oz canvas upper in Green w/sign language print (pictured) or Black (with green sign language print on the internal lining) if you don’t want that flashy look. 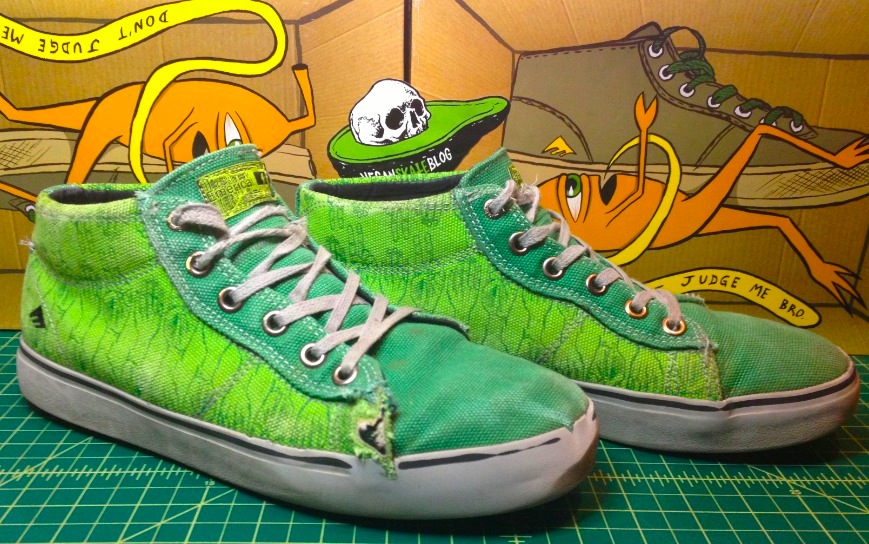 The Tempster has seen some heavy wear with approximately 15 hours of skate time in this photo. For being a canvas shoe everything is holding up exceptionally well. This was a concern in the comments section in the last Tempster post, but so far hasn’t proven to be an issue. Emerica (and SoleTechnology) has made some amazing strides with their “heavy duty” 20oz canvas which not only holds up well under the abuse of grip tape but breaths much better then some of the synthetics out there. 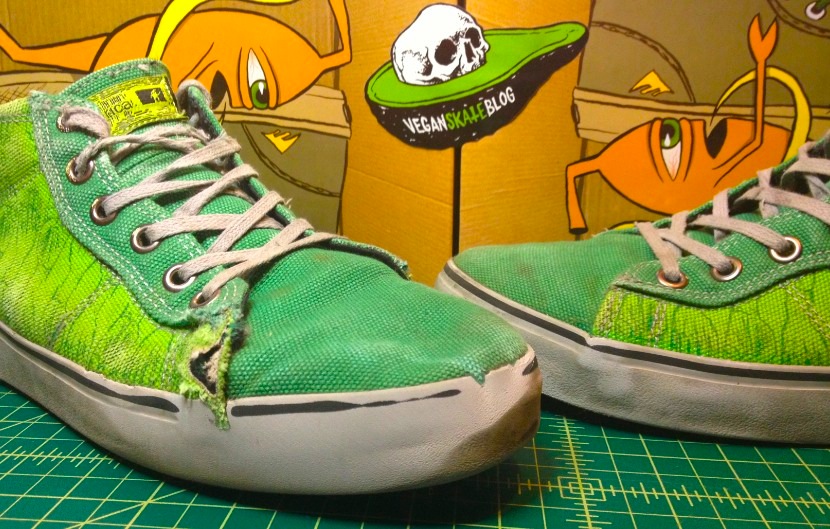 The rubber is shaved off and becoming thin. As its worn down the shoe just becomes more fun to skate. While the shoe is pretty thin in the collar and tongue the soles are hefty and can take some abuse. 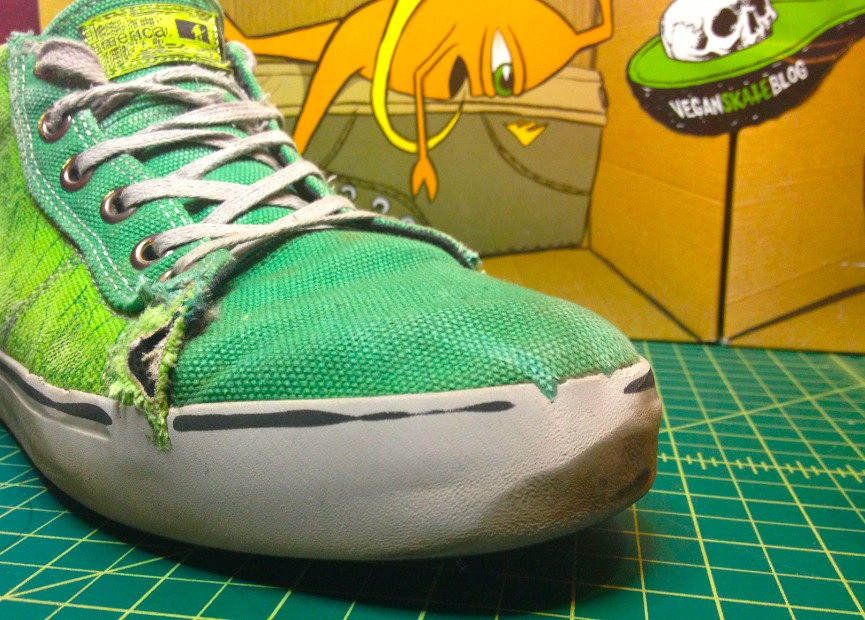 Giving a closer look to the toe cap and ollie area the canvas is imbedded well into the foxing tape of the vulcanized soles. That foxing tape which wraps solid to the heal is particularly thick in the toe adding some significant skate life to the shoe. One of the stitch lines is right in the ollie area and is clearly ripped. However that imbedded canvas has kept things from falling apart. The multiple stitch lines in the sides of the shoe are also buried well into the midsole. This is a no blowout shoe. 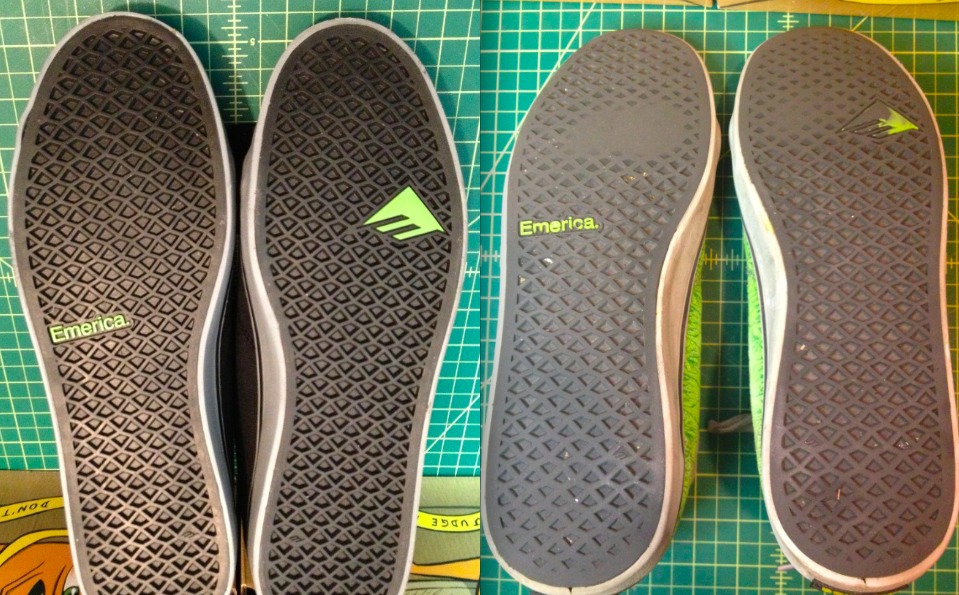 Soles before and after 15 hours of skateboarding. The new tread pattern on Emerica’s skate line is a triangle shape (like the shadowed Emerica E logo.) Material wise Emerica isn’t listing the NBS rating (most skateboard shoes are NBS 400)  The shine and feel are sturdier then earlier models we have reviewed using a herringbone tread. While the grip from herringbone treads are grippy early on, they usually flat spot wider and faster at the ball of the foot.  The new Emerica triangle tread pattern has a nice flat spot on the right (goofy) shoe but much smaller then in previous review models. This is a huge win for Emerica and a great improvement from seasons past. 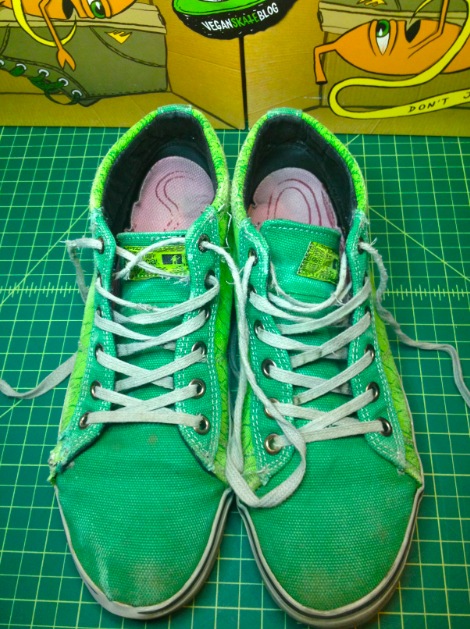 The Tempster has held up exceptionally well and was a much anticipated shoe on VSB. The return of a shoe by one of the most beloved Pro Skateboarders (who happens to be vegan) is certainly going to get some love in turn by our readers.  That being said, we’ve had some feed back and our own opinions on the shoe.

The Tempster is great for skateboarding. Right out of the box, lace them up and you can jump on the board. The vulcanized soles have an amazing board feel just like every shoe Emerica is putting out. That being said sizing and fit is an issue.   The Tempster runs a little large, but not large enough to go a half size down.   The shoe also runs  wider then other Emerica models. Maybe Ed has wide feet, so if most skate shoes are too narrow for you, this is definitely your shoe.    The last issue; the canvas does not stretch. Even as the shoe wears you will have to loosen the laces significantly before jamming your toes in and then lace them back up. The non-stretching isn’t a bad trade off though considering the trade-up in durability.

The loose width is easy enough to remedy. Pull the laces tight and they feel more connected and snug. Both colorways are pre-laced with P.E.T. laces made from recycled soda bottles. They feel ruff, but once pulled tight rarely come undone. Eventually these are going to see their final rip and the replacement laces are tranditional so may not hold as strong.

The Tempster is a fun shoe and we hope Ed has many more coming down the line with Emerica. Improvements can be made, but its still a worthwhile skate shoe and despite some of the short comings in sizing, we really dig it.  This is a shoe you can lace up and skate all day!

Then check out our interview with Ed, where we talk about his shoe, veganism, and creepin’.